Even now, all these years later, it’s difficult for me to talk about Ayrton, and not only because he’s not here anymore. When he died, I said I felt a part of me had died also, because our careers had been so bound together. I know some people thought I wasn’t sincere, but I meant it. I met him first in 1984 at the opening of the new Nürburgring GP circuit, where there was a race for F1 drivers in Mercedes road cars. I took Ayrton from the airport, and we got along well. Then, in the race, I took the lead–and after half a lap he pushed me off! So that was a good start … 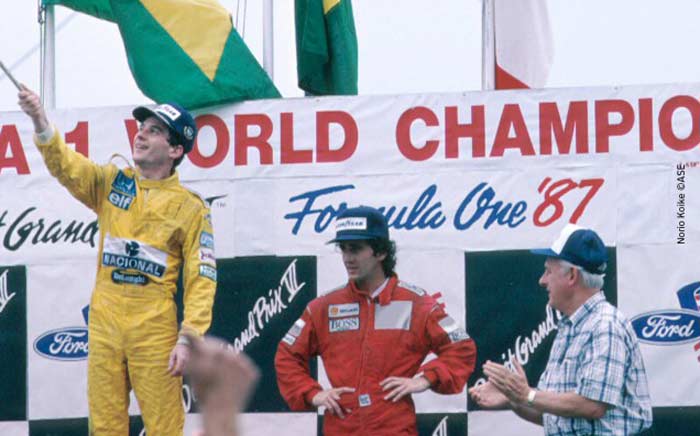 This was his first year in F1, with Toleman, and it was soon clear he had a special talent and also that he was very tough on the track. Actually, I believe now it wasn’t so much being tough as it was having his own rules: He had them, he believed in them and that was it. He was very religious, and he used to go on about speaking the truth, about his education, his upbringing and so on. I used to think that some of the things he did on the track didn’t fit with all that, but he believed he was always in the right. We didn’t have any problems until Estoril in 1988, when we were McLaren teammates. As I passed Ayrton, he swerved at me, putting me maybe a foot from the pit wall. I didn’t lift and won the race, but I was shaken by what he’d done, and I told him what I thought. In a way, though, I can’t blame him, because he always got away with it! After all, how many times was Ayrton sanctioned for that kind of thing? Never.

It was in Imola in ’89 that the relationship between us disintegrated. We qualified one-two, and Ayrton suggested we shouldn’t fight at the first corner, Tosa, on the opening lap; whoever got there first would have the position. He led away, with me second, but then the race was stopped when Gerhard Berger had a big crash. On the restart, I got ahead–and at Tosa, Ayrton passed me! Afterward, he argued that it wasn’t the start: It was the restart, so the agreement didn’t apply! I said I’d continue to work with him on technical matters, but that was it. And the atmosphere in the team became very bad, of course. At the end of the year, going to Suzuka, I was ahead on points, and I told the team, “There’s no way I’m going to open the door anymore.” I’d done it too often, and I’d had enough.

Eventually, we crashed at the chicane. Everyone thinks I did it on purpose, but I didn’t want to finish the race like that. I’d led from the start and I wanted to win. When he tried to pass, I couldn’t believe it because he came from so far back, but I thought, “I’m not going to leave him even a 1-meter gap.” As I’d said, I didn’t open the door. A year later we were back at Suzuka, again to settle the championship. Now I was with Ferrari, and into the first corner Senna drove into the back of me, and he later admitted he did it on purpose. I always said, Ayrton didn’t want to beat me, he wanted to destroy me. That was his motivation from the first day; on my last day, in Adelaide, everything changed completely. On the podium in Japan two weeks earlier, he wouldn’t even look at me, but now I was retiring, and he put his arm around me!

After that, we spoke often on the phone, usually about safety, and we agreed to discuss it at Imola. That weekend he was much softer, very down somehow, without the same power as before. We had a conversation on the Friday, and I saw him again on race morning–after Ratzenberger’s accident, of course. I could see he wanted help, that he needed somebody. We were going to speak again the following week. Of course, that never happened. When people ask me who was the best driver I ever raced against, I say, “Senna, by a long way.” Whatever our problems, one thing that never changed was our respect for each other as drivers, and once we were not rivals anymore, everything was different.

I look back on those days now and think to myself, “Why did we put ourselves through all that? Why did it have to get so venomous?” I used to say to people, “You’re a fan of Ayrton Senna? Good, that’s fine, but please don’t hate me!” If we had to do it all again, I’d say to Ayrton, “Listen, we’re the best. Between us, we can screw all the others!”

Still, though, it was a fantastic story, wasn’t it?