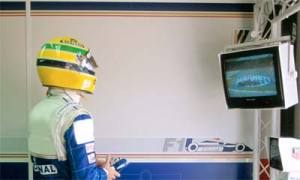 May 1st, 2014 marks the 20th anniversary of the death of Formula One legend Ayrton Senna, one of the greatest racing drivers the world has ever known.

Jalopnik reader Alan Dahl was there at the 1994 San Marino Grand Prix where Senna lost his life.

This is his story

In 1994 a friend of mine, Neil, had just retired from Microsoft at the ripe old age of 34 and had managed to land a job with the Ferrari Formula One team programming some of the early telemetry and simulation software used in F1. Naturally, I had to go visit him as I had been wanting to go to Europe for years anyway. I planned a three-week European vacation culminating with a trip to the San Marino Grand Prix, just an hour down the Autostrada from Neil’s home in Maranello. I was a huge Ferrari fan so this was a dream come true.

After spending two weeks touring Holland and Germany (the autobahn is no fun in a Renault Clio 1.2, FYI) I took a train from Munich to Bologna. Soon after I arrived at Neil’s house in Maranello in my new Fiat Punto rental car to find he was still at work. When I called Neil, he asked if I could give him a ride to the Alfa dealer so he could pick up his new 155 to replace a borrowed Lancia lost to a fire.

The week before the race was wonderful. Each day I headed out in my Fiat to see some historic Italian town like Pisa or Florence and then we’d meet up in the evening to go to a local restaurant (Neil was a true bachelor and ate out nearly every night). A few days later Neil’s friend Jean Claude joined us and the next day we headed to Imola sans tickets, which Neil convinced us wouldn’t be a problem (my how things have changed!). A quick stop at a Imola tabac and $130 each later we had silver grandstand tickets for qualifying and gold tickets at the back end of the grid for the race itself.

This wasn’t my first Formula One race. Neil and I and two of our friends had attended the Phoenix F1 race a couple of times, but it was nothing like experiencing a race in Italy. Even for qualifying there were a goodly number of people in the stands, most of them of course rooting for Ferrari. Back then qualifying wash’t today’s knockout style, but a two-day affair where each driver’s best time was used no matter if it happened on Friday or Saturday.

We weren’t quite sure what had happened to Roland Ratzenberger.
Our seats for qualifying were overlooking the Variante Bassa just before the start-finish straight. We were just one row from the top just below the wild contingent from the Ferrari Club Gilles Villeneuve – Belgium. I had bought a new telephoto lens just for this race and was lining up to take a photo when I heard a tire squeal and without looking up turned, focused and caught an incredible shot of Rubens Barrichello in mid-tumble just milliseconds after he hit the wall of the Variante Bassa.

We were quite worried for Rubens but luckily his car came to rest right in front of the track hospital so the medics were there within seconds. It wasn’t until years later that I discovered that I had taken the only photograph of what is now a near-legendary crash.

Saturday we returned for the second qualifying session. Since Neil didn’t speak a lot of Italian we weren’t quite sure what had happened to Roland Ratzenberger, but after we saw his mangled car hauled in, we were quite worried to see the small track helicopter take off and be quickly replaced by a large medical helicopter from Bologna.

Looking back on it I, knew it wasn’t a good sign when I saw Nikki Lauda and Jean Alesi (who was sitting out the race because of a back injury in testing) standing along the wall near the Simtek pits looking concerned.

It wasn’t until we got back to Neil’s place and read the news on the RAI teletext that we knew for sure that Ratzenberger had died. This was just shocking as he was so new to F1 that none of us even knew what he looked like. We later watched the qualifying session on tape and were quite surprised to see that at one point the world feed had zoomed right in on our Belgian friends and there we were big as day on TV, which should have been exciting but wasn’t given the circumstances.

Senna had won the pole over Schumacher and Berger which wasn’t a surprise to me as he’d won the two previous Grands Prix I’d attended in Phoenix. I have to admit that I was not a huge fan because he’d narrowly beaten then-Ferrari driver Alain Prost at the ’91 Phoenix GP so I considered him more like an enemy. There was no disputing his talent, however, and now 20 years later I find I feel much the same way about Sebastian Vettel.

Sunday we got to the race track early with some trepidation. The Simtek pits were closed up tight and we assumed that they wouldn’t race so we were quite surprised when at the last minute they rolled out David Brabham’s car for the start.

The start was another cluster as JJ Lehto, who had qualified 5th, stalled his Benetton and was hit by Pedro Lamy, throwing debris and tires up into the stands at about the level we were at but thankfully far up the grid. The safety car came out and the cars putted around the track until everything was cleaned up and the race was back under way.

We were quite surprised to see the marshals come out and stop the cars before the pit entrance.

After the restart at the completion of the first hot lap I snapped a photo of Senna leading Schumacher and Gerhard Berger (who of course we were rooting for) and eagerly awaited their return the following lap. We were quite surprised to see the marshals come out and stop the cars before the pit entrance.

Eventually before they were allowed to slowly proceed to the grid. After a while they brought in Senna’s car on a wrecker which wasn’t surprising as we’d noticed it missing. However we weren’t worried as the car didn’t look that badly damaged and unlike Ratzenberger’s wreck the day before the track helicopter never moved.

After a while the race was restarted and we were excited to see both Berger and Alesi’s replacement, test driver Niccola Larini, doing well. So we were quite surprised when Berger came in for his scheduled pit stop and never came out. The explanation at the time was “suspension failure” but later we learned that the team had pulled him out of the car because they felt he wasn’t in emotional shape to drive since he’d seen the accident scene close up and knew that his friend Senna had died.

The drama at the race weren’t over yet either. Near the end of race a tire came loose from Michele Alboreto’s Minardi as it left his pit. It struck two Ferrari and two Lotus mechanics before bouncing something like 20 feet high before finally coming to rest at the exit of the pits.

When the race was over Michael Schumacher was the winner but we were most excited that Larini finished second with the best finish of his Formula One career. We joined the rest of the crowd in celebrating on the front straight but I noticed that nobody on the Ferrari team looked all that happy despite the second place. From the rowdy celebrating I doubt that most of the crowd on the front straight knew what happened, there had been no announcements in English and from what we could tell from the little Italian we knew none in Italian either.

For years I felt guilty that I had fun at the race.
When we got home we rushed to watch the recording so we could see what we missed but before we did we once again checked the RAI teletext. We were surprised to see instead of the usual listing of news headlines, just one big headline: “Senna il mort.”

We were absolutely shocked because we had seen the car and it simply wasn’t that badly damaged. So we sat down and watched the race and saw for the first time the crash and the attempts to revive him. For those home in America who received the edited BBC coverage without the helicopter close-ups RAI showed be grateful.

There was no question from the RAI telecast that he had died, if the lifeless body lying on the track wasn’t enough the trail of blood flowing from his helmet left no doubt.

For years afterwards I felt guilty that, not knowing that the tragedy had happened, that I had fun at the race. It had been the time of my life at the race drinking in the Italian F1 scene in all it’s glory and it was hard to reconcile this with the fact that men had died in the process.

But then I realized that Senna was having the time of his life too. Death is something that comes to all of us eventually, and Senna died doing what he loved.

Senna died as a champion and in my mind, no matter who wins the title after him, he will always be the champion of F1.

Alan Dahl is a computer programmer and longtime F1 fan who lives in Washington State. He is also a two-time SCCA ProSolo autocross National Champion and ran a 1988 Peugeot 505 five times in the 24 Hours of Lemons under the team name “Cheese Eating Surrender Monkeys.”