It has a deeper meaning than similar driving ability or comparable speed. It means receiving a ticket to that exclusive circle of talented men who with their hands at the wheel are capable of going beyond the technical capabilities of their car. And it’s a passport to an even more restricted group of drivers who fly in the face of danger because, in any given moment, danger is simply not an issue: thinking it about it just doesn’t make any sense. Yet it’s not just that.Being compared to Senna conjures up a feeling of something otherworldly. It suggests a certain kind of motivation, of going so fast, beyond every rational limit, that it can only be justified by some distant, hidden connection. 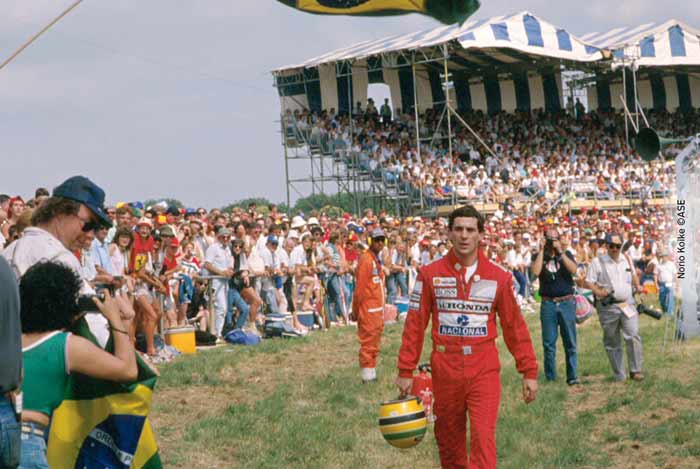 Senna knew that the questions regarding some of his behaviour on the track were about more than his track times. Asking him for an explanation for certain driving exploits came naturally. And he played with it: he would look you in the eye with that often distant gaze and would answer with an almost embarrassed smile, as if to say “How could I ever explain it to you?”.

Right now the new Senna is Max Verstappen. The boy from the Red Bull team – whose talent became so apparent so quickly that he made his Grand Prix debut before he was old enough to have a driving licence – finished the 2016 World Championship season with an incredible performance in Brazil on a wet track. During the finish to a race which pushed past all limits, distinguished by his own particular racing line and the overtaking of famous adversaries like so many bowling pins (Sebastien Vettel included), Verstappen seemed to be on another level entirely. Yet even before that race he had already given reason for the comparison over the course of the season.

When, for instance, he so clearly blocked and insulted Kimi Raikkonen (at full speed) and justified it at the end of the race with a blunt explanation: “He deserved it: he ruined my race on the first corner. “That’s it: that feeling of being outside the normal rules of behaviour, being able to judge yourself by something other than the rulebook, that feelingbelonged to Senna. And now, it seems, it belongs to young Verstappen. Uniting them: a mission from God, to play on the words of the Blues Brothers at the beginning of their legendary eponymous film. Drive, drive, drive. And win. And everybody else, please get out of the way…

But let’s leave Max Verstappen in peace for now: he’s still very young, with the whole world ahead of him, and he will write his own story, and his own success. Let’s get back to Senna. Why him? Why, when the history of Formula 1 racing is packed with great personalities and high speed drivers, is this Brazilian champion, 22 years after his decision to join Williams and his death, still stuck in the head of motor racing enthusiasts? The answer, very briefly, and simply: because he didn’t want to race, he had to race. He didn’t want to win, he had to win. Since he was a boy, his entire personality was consumed by this single objective. Starting with karting where, like most drivers, he gained his first track experience, soon winning at every level. He passed through the pre-Formula 1 classifications, before making his F1 debut in a Toleman car in 1984. Though the car was hardly a bolt of lightning, Senna pulled off a near miracle at Monaco, gaining several seconds a lap on the new champion Alain Prost, who had dominated the season with McLaren. It needed a chequered flag unveiled early by an officious race director, – surely a home Frenchman like Prost – to rob him of a victory which would have immediately catapulted him into the history books.

Senna had begun a special relationship with the rain and with Monaco. With wet tarmac it was simply a question of training: the young Ayrton felt weaker driving on water and so began a special period of study which would result, a few years down the line, in him becoming the absolute master of the surface. For the track of the Principality of Monaco, it was simply a question of feeling. At the risk of sounding clichéd, in Monaco the circuit and the casino obey the same rule: odds or evens, red or black, fortune or disaster. As far as racing goes, with the guard-rails which line the track on either side, the difference lies between brushing past them and slamming into them. Senna leaned into them. He used them as a layer of containment, touching them just enough to not cause any mechanical damage while leaving not a single millimetre of the track unexplored. For Senna, that alley between the barriers became a blind tunnel: inside, marking time; outside, the world, which at that moment had absolutely no interest whatsoever. A piece of film recorded in the cockpit of his McLaren in qualifying in 1989 provides further insight. It’s still available on YouTube: it would appear to be on fast forward, except for the right hand which switches constantly from the steering wheel to the gear stick, making you realise that the speed of everything is insane, but very real. “From the box they were telling me to slow down, that I already had pole,” Senna explained. “But for me that was impossible: I could only keep going, corner after corner, gear change after gear change. I felt I was getting faster and faster and I couldn’t stop myself…”

Once more, to make it absolutely clear: Senna was possessed by speed. Before going against the other drivers, before winning and getting pole position, first he had to challenge himself. A personal confrontation with the very idea of speed, with its rational limits. Limits to be conquered, regardless of what he found in his way. Up to the paradox of Alain Prost, coldly hit by Senna at the first corner at Suzuka during the 1990 Japanese Grand Prix in order to make mathematically certain that he would be world champion (he admitted it one year after). A decision, he confessed in a whisper to a group of stunned journalists, which had been authorised by God.

That’s why, perhaps with one or two steps over the line, being like Senna means more, much more than being fast or even super-fast. Being like Senna is a question of spirit.