A host of electronic devices, including ECU (Engine Control Unit or as some people call it Electronic Control Unit) which transmits specific data, for example measurements, but not only, to a remote site, in F1 case, to pit wall and pit garage. It electronically records performance of engine, status of suspensions, gearbox data, fuel status, all temperature readings including tires temperature, g-forces and actuation of controls by the driver. The data is then used as a foundation for determining car setup and all problems.

Use of telemetry started in the late 1980s when teams were sending data only in the bursts as the car pass close to the pits. Technology moved on to continuous high rate data in the early 1990s, but on tracks like Monza, Spa or Monaco where cars pass through trees or betveen the buildings, there would be sections of the tack where teams lose coverage in terms of real time data. There were a period of time when teams couldn’t see anything.
Into the 2000s, teams fixed that limitation by retransmitting not recieved data as soon as the car got back into areas of coverage. By the time the cars went past the garage, all the data for that lap had been seen. 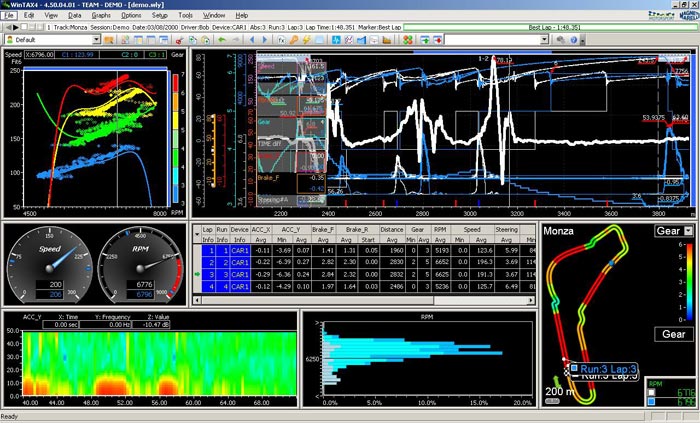 In 2002 two-way telemetry was permitted so engineers could change settings on the cars from the pits. This is no longer allowed, but much was learned.
Nowadays they use multiple antennae around the circuit. McLaren Electronic Systems, the supplier of the F1 Electronic Control Unit, place antennae that are available for all the teams to use. As the cars go around the track, as they move out of site of one antenna they come into sight of next one and use that one to send the data across. This manages the transition between antennae, which is how a mobile phone network works. What that means for F1 is that on any circuit, including the difficult circuits, you get almost 100% time coverage and at the same time high bandwidth that the teams demand.

Working with the telemetry data, a large part of the time is spent working on the differential, the most tunable part of the car. The differential, which allows the two rear wheels to rotate at different speeds, can be adjusted for corner entry, mid corner and corner exit. It plays a big role in cornering stability and done well can contribute a lot to the lap time. So, how telemetry works? As we sed before, under FIA rules, it is not possible to send electronic information to the cars. So this system is a one-way system that sends data from the cars to the pit. Then the engineers can analyze the data in real time and see if something is wrong or tell the driver how he can improve the way he is driving or setting of the car. A lot of teams send data also to Head Quarters, where a whole team is dedicated to analyze the collected data in real time.

Each car has from 150 to 300 sensors. The number isn’t exact because from track to track they add and remove sensors. Also, from the training sessions to the official race they can remove some sensors they found they won’t need for that particular track and thus can save some weight. Data is sent from the car to the boxes using from 1,000 to 2,000 telemetry channels, transmitted wirelessly (obviously) using the 1.5 GHz frequency or frequency allowed by local authorities. These channels are encrypted, of course. The typical delay between the data being collected and it being received at the boxes is of 2 ms. For each race the amount of collected data is in the range of 1.5 billion of samples. Since they also collect the same amount for each training day, the total amount of collected data is in the range of the 5 billion samples. During a 90 minute session the team will collect between 5 and 6 gigabytes of raw compressed format data from the one car.

Since data is compressed, here they don’t talk about megabytes or gigabytes, so the actual transfer rate used by the telemetry system is smaller. Each car is independent, so since each team has two cars, the number of collected data is actually two times higher. The transmitter is placed in the sidepod and then a cable runs to an an antenna on the nose on the car. Each car has also an on-board storage system that buffers the most recent data, so if the transmission fails, the car keep retrying until the transmission is completed. Teams don’t want to disclose if it is a hard disk drive or a flash memory they using for this, but my guess is that in this days they all using flash memory. So no data is lost when the car enters in a Monaco tunnel, for example: as soon as the communication is lost, the car keeps collecting data and storing on its on-board memory and as soon as it exits the tunnel or any blind spot, all data collected during this period is sent at once to the boxes.

The data is then decoded and converted into a signal that can be understood by a PC. It goes through a data server system called ATLAS (Advanced Telemetry Linked Acquisition System, developed by McLaren Electronic Systems – MES) which displays the telemetry channels for the engineers. This is the suite which displays all the wavy lines on the screen. In summary, a lot of computers with several LCD displays plotting charts and showing data, with lots of engineers analyzing the data.

If you pay close attention to Ferrari F1 cars, you will notice an AMD logo on the tail. For the majority this simply means that AMD is paying to run an add on Ferrari cars, but that isn’t the case. They are also providing the technology infrastructure for the car’s telemetry system, which collects data in real time and send to Ferrari team during the races, so they can check in real time if something is going wrong and also instruct the driver of corrections he should make in the way he is driving in order to achieve a higher performance during the race. The collected data are also collected for after race analysis.

In Formula 1 racing and radio frequencies used during the race weekend and test sessions, only solution was to develop a custom radio system. Systems such as GSM, DECT and Bluetooth were never designed to support the data rates required or operate in this radio environment. The starting point in the design of a custom communications system is to address the first key question: What are the requirements of the system?

Considerations of a wide variety of parameters including the huge data rates, available frequencies, acceptable latency, quality of service, countries of operation, hardware size, cost, power consumption and more are all required. Radio frequency spectrum is a rare resource and is managed by international and national regulation. The selection of a suitable frequency band is a complex issue. This can typically be limitations on maximum output power, acceptable modulation schemes, installation locations and the applications served. The regulations vary from country to country although the process within the EU is now quite well harmonized. All data are send in encrypted way to prevent data leakage to other teams.

We can loosely compare ATLAS system to Microsoft Excel in reference to its working surfaces. In Excel, most people are familiar with the spreadsheet, referred to as a “workbook.” Within that “workbook” are multiple “worksheets” containing any number of user created charts and information. Organization of the working surfaces of ATLAS is similar in that an ATLAS “workbook” contains multiple “pages” organized in a similar Excel tabular graphic user interface. Each page contains user created “displays” on which to analyze data. The printed sample on the picture below is data of two drivers “overlaid” and printed on one single ATLAS “workbook”, in the same manner that an individual chart can be printed from Excel. In this way driver can compare each lap and learn and improve his style of driving, or learn and comparee his lap to lap of his teammate. 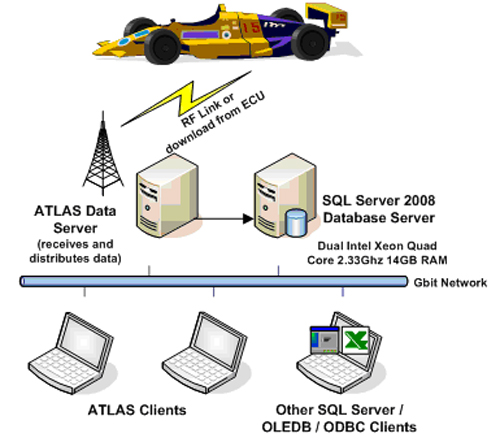 One of the best known suppliers of the telemetry equipment is Plextek. Plextek is currently supplier for Sauber, Williams, RedBull, STR and Ferrari. This company was approached in 1998 by Pi Group, in this time sponsor and supplier of electronic equipment for Williams and Jaguar F1 Racing, to develop a new telemetry system for Formula One motor Racing.

First tests of new Plextek system were undertaken at the Silverstone, Hockenheim, Nurbergring and Barcelona circuits to allow models of a number of different environments to be produced. From the measured data the proposed system design was developed and tested to produce coverage estimates showing the likely performance of the system. This approach allows an early check on whether the initial objectives of the system are likely to be achieved prior to the final design of the equipment. The Formula One motor racing telemetry system developed by Plextek and Pi Group raced into first place in the San Marino Grand Prix at Imola on Easter Sunday 2001 when the Williams-BMW Team notched up the first victory of their two-year partnership.

In the gap between the 2001 and 2002 season, Pi came back to Plextek for a software upgrade program. These system improvements allowed a fully acknowledged handshake protocol. The new software also provided a data downlink channel to the car, which was illegal under the old 2001 FIA rules but has been allowed from 2002. The new Plextek software allowed the teams to receive error free transfers of data from the cars, and reliably send command information to the cars to tune performance during the race. The upgraded telemetry system was installed on four Formula One team cars including Williams-BMW, Jaguar and Arrows.