Ola Amigos … Welcome to my little page, enjoy your stay. 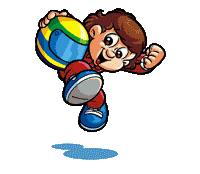 Senninha is a boy who lives with a community of friends by a race track. Rather than playing football he races a go-kart. Senninha has all the qualities that celebrate Senna, he is simple, honest, hardworking and, above all, a winner. Senna launched Senninha shortly before he died. Rather than retiring him after Imola, Senninha has grown from strength to strength and now rivals Mickey Mouse in the hearts of young Brazilians, even those born years after Senna died.

Senninha was released by Ayrton Senna on February 27, 1994. Its designers are Rogerio Martins and Ridaut  Dias Jr.

And you know what’s cool too? Part of the value of all the products you buy branded Senninha goes to the work of the Ayrton Senna Institute, which helps thousands of children and young people to have a quality education. 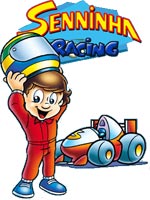 Senninha was created by Ayrton Senna to be a channel of communication with children. The character is an eight year old boy who loves speed and also wants to be a F1 driver. As Senna, his world is surrounded by cars, rods, chassis and tires, but also elements that appeal to children: cars with different design, gadgets and powerful tools. More than fifteen characters are part of the gang, whose amusing stories are imbued with the values that Ayrton lived on the track and in life, motivation, determination, pursuit of perfection and transcendence.

The proceeds from the 100% of the royalties from licensing the brand Senninha are fully reverted to educational programs. Connecting to the character Senninha brand represents a distinct opportunity for companies that believe in a better future for coming generations and the success and credibility of your products or services.

Product quality is allied to the character Senninha that, besides being a spokesman of values and a social cause, embodies the confidence of the working of the Instituto Ayrton Senna. Currently there are over 250 licensed products by 23 companies in the categories food, personal care, clothing, footwear, toys, stationery and back to school, automotive products and online pet.
This is another way to add the brand Senninha and the Instituto Ayrton Senna happens to the product through promotional campaigns. Companies offer products and / or services to its consumers, combining this offer to the values and character because of Senninha to potentiate the actions in a given period. For this purpose, are developed and planned promotional strategies that generate income and donation of funds for educational programs of the Institute Ayrton Senna.