Bruno Senna officially announced the Ayrton Senna Foundation ‘Senna Tri Campaign’ at the Suzuka Circuit in Japan on the opening day of the Japanese Grand Prix. 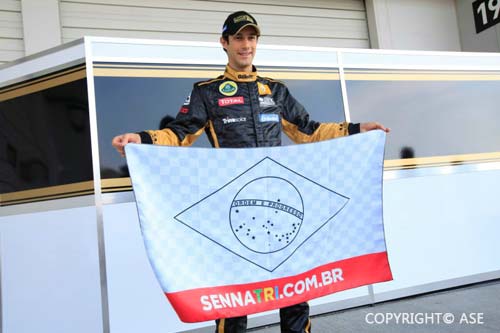 The campaign, which has the motto “one conquest inspires another one”, marks the 20th anniversary of Ayrton’s third Formula 1 world title and seeks to raise awareness of the work of Ayrton Senna Institute.

Bruno Senna officially launched the initiative with the unveiling of a colourless ‘Sennatri’ Brazilian flag which, between now and the end of November, will be filled with images of Ayrton’s fans. The flag will re-appear when Bruno holds it aloft at the season finale in Brazil, but the Lotus Renault driver will also wear a specially-branded Sennatri helmet from next weekend’s Korean Grand Prix through to the end of the season.

“Given the role the Suzuka Circuit played in some of my uncle’s world championship battles, it is the perfect place to launch this initiative,” Senna said, “It’s one of my favourite tracks, so to kick-start the campaign here in the lead-up to my home race in Brazil is very appropriate.

“It’s a real privilege to be able to work on this campaign and to be able to build awareness for a cause that the Ayrton Senna Foundation is all about – educating the needy in my home country of Brazil. I hope that as many Senna fans as possible will get involved over the next month-and-a-half, and then it will be their faces that we see on the Brazilian flag in Sao Paolo at the end of the season! Hopefully all fans can become a part of this by interacting on Facebook, Twitter and Orkut and start spreading the word of this very worthwhile project.”