By mid-1993 the McLaren Formula 1 team was in bad shape. Their immensely successful partnership with Honda had ended in 1992 due to an economic recession, and with it their competitiveness waned. Forced to use the inferior Ford HBD V8 in 1993, the team slowly lost their edge. Superstar driver Ayrton Senna managed to elevate the mediocre MP4/8 through sheer skill, scoring four victories and 2nd overall in the championship, but the message was clear. In order to keep challenging the much more powerful Renault V10 Williams a change had to be made for 1994.

To make matters worse McLaren lost Senna to Williams for the 1994 season, as the Brazilian wished to race in the most competitive team in the field. Young Fin Mika Häkkinen had featured as Senna’s team mate for the final three rounds of the 1993 season as the disillusioned American Michael Andretti quit F1 before the end of the season. Häkkinen opted to stay with McLaren for a second year. The experienced Brit Martin Brundle was drafted in at the last second to replace Senna after the retiring Alain Prost had declined an offer from McLaren. 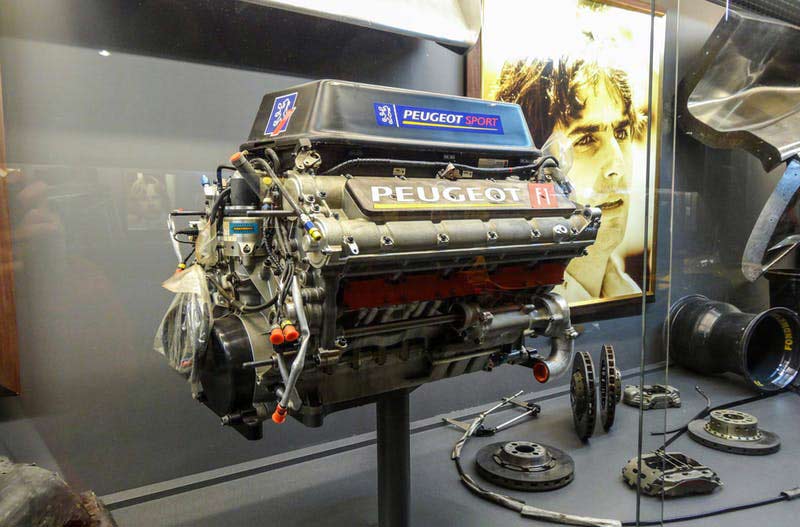 The team’s 1993 engine supplier, Ford, had been unable to give them their most competitive engines for most of the season due to a pre-existing contract with Bennetton. Frustrated with the lack of power compared to Bennetton’s advanced development engines and the Renault V10’s, McLaren hastily sought out an alternative. After a promising test in september 1993 of Lamborghini’s improved 3512 3.5L V12 which enthused both Senna and Häkkinen, McLaren’s chief Ron Dennis made a suprise deal with Peugeot. Senna left the team beforehand, and is said to have had some serious doubts about the French engine.

The A4 3.5L V10 was descended from Peugeot’s highly successful 905 Group C project, dominating the World Sportscar Championship and winning Le Mans in both 1992 and 1993. The engine regulations for Group C had been equalized with Formula 1 in 1991, to entice big manufacturers operating in the more popular Group C category to build more expensive F1 engines and enter their own teams, effectively destroying the WSC by 1993. Ayrton Senna reportedly questioned the endurance engine’s capability to withstand the high-strung savagery of an all-out Formula 1 sprint race.

Nonetheless the program proceeded without Senna. Designer Neil Oatley fashioned a new chassis around the 700 horsepower A4 powerplant, which was mated to a 6-speed semi-automatic transmission developed with technological partner TAG. The Ford HBD V8 used in the MP4/8 produced 680 horsepower, making the Peugeot little better.

In contrast the Lamborghini V12 used in 1993 testing produced around 760 horsepower, on par with the Renaults, making it seem the better option. Regulation changes for 1994 had banned the multitude of electronic driver aids so dominant in the previous years. The active suspension, traction control and power-assisted ABS brakes of the MP4/8 were by now all history.

Peugeot had initially brought in Philippe Ailliot, their star Group C driver, to partner Häkkinen in the second car. Ron Dennis was not in the mood for this at all as he disliked Ailliot and favored Martin Brundle. Ailliot had been competing in various back-marking F1-teams since 1984, and made a name for himself as a fast crasher. Dennis put his foot down to relegate the unreliable Frenchman to testing duties. The first round of the 1994 season took place at Interlagos, Brazil. The speed promised by the new engine failed to materialize, as Häkkinen qualified a disappointing 8th. Brundle was down in a dramatic 18th position on the grid. Häkkinen’s engine blew up after just 8 laps. On lap 34, Brundle was taken out by a violent 4-car shunt caused by Jordan driver Eddie Irvine (GB) forcing rookie Bennetton pilot Jos Verstappen (NED) on the grass while lapping the Ligier of Éric Bernard (FRA). Verstappen was launched into the back of Brundle, ruining the day for both men.

For the second round F1 would move to the Pacific Grand Prix held at Aida, Japan. Häkkinen and Brundle improved considerably in qualifying, scoring 4th and 6th respectively. History repeated itself however, as Häkkinen was stranded with a broken gearbox after 19 laps, and Brundle’s V10 overheated on lap 67.

At Imola both cars finally reached the finish. Häkkinen continued to lead the McLaren effort in 8th, with Brundle down in 13th. Sadly, the team’s minor success was greatly overshadowed by the tragic death of Austrian rookie Roland Ratzenberger and McLaren’s beloved champion Ayrton Senna.