Ayrton Senna da Silva was probably the best Formula One driver of all times, despite the fact that there had been other pilots that managed to win more races and championships. The Brazilian racing legend was born on March 21, 1960 and managed to win the Formula 1 championship three times.

Senna’s racing journey began in karting and in 1983 he moved on to the more competitive world of open-wheel racing. Two years later, he won the British Formula 3 championship and in 1984 he debuted in Formula One, behind the wheel of a Toleman-Hart car, before becoming a driver for the legendary Lotus-Renault team. Over the next three seasons, he managed to win six GPs. 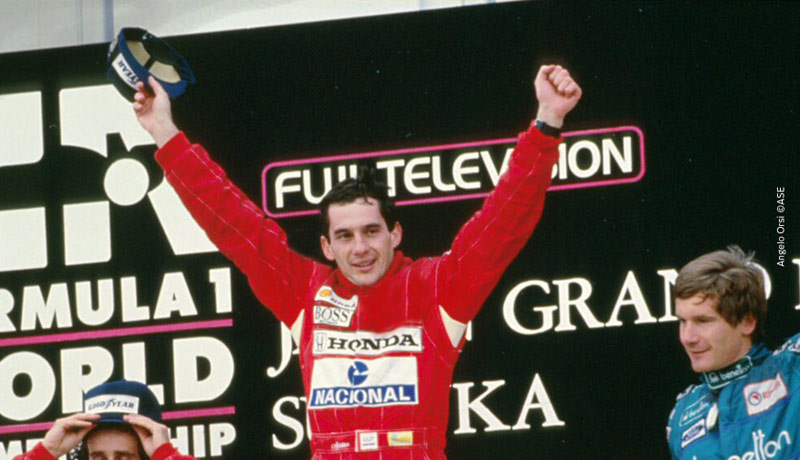 Later on, he became a driver for another legendary team, McLaren-Honda, joining Alain Prost in 1988. That year, they’ve won all races, except for one, and Senna grabbed his first F1 title. One year later, Prost got his revenge, managing to win the championship, but Senna responded the next two years, with his second and third title. 1992 was the year when William-Renault began dominating Formula One, but Senna managed to finish the season in 2nd place, winning five GPs.

It all ended dramatically for him on May 1st, 1994 when he crashed his car into a concrete barrier while he was leading the San Marino Grand Prix held at the Autodromo Enzo e Dino Ferrari in Italy. That weekend turned out to be a real tragedy, as a day earlier, Roland Ratzenberger was killed after he crashed during the qualifications for the race. These two incidents are considered to be a turning point in the safety of F1, prompting the implementation of various safety measures, along with the reformation of the Grand Prix Drivers’ Association.

Ayrton Senna was a great man not only for his epic racing talent, but more for his generosity and goodness. He was a practicing Catholic, and after his tragic death, it was discovered that he had quietly donated millions of dollars to help children in need. Right before his accident, he created the foundation for an organization dedicated to children in Brazil, which later on became the Instituto Ayrton Senna.

The irony is that Senna became more and more worried about the dangers of his dangerous profession and on the morning of his fatal accident he initiated the reformation of the GPDA safety organization as he wanted to work to improve the safety of the sport.

Soon after his death in 1994, the Brazilian soccer team who managed to win the World Cup dedicated its victory to Senna, recognizing his contributions to this sport. In Brazil, the main freeway from the Sao Paulo international airport, along with a tunnel, are named in his honor. In addition, one of the most important freeways in Rio de Janeiro was named “Avenida Ayrton Senna”, while the main road in his resort at Quinta do Lago was also dedicated in his name.

You all probably know that one of brains behind the epic Honda NSX was Senna himself. During the late 80s, the relationship between him and the Japanese automaker was very close, and the latter asked him to fine-tune the suspension of the NSX. At first, he said that the car’s chassis wasn’t stiff enough so the production version was reinforced in order to meet Senna’s requirements. Ducati, the famous Italian motorcycle manufacturer produced limited Senna editions of its 916 superbike between 1996 and 1998. During those years, the company was owned by Claudio Castiglioni, who was a very close friend of Senna. Several years later, in 2002, another special edition was dedicated to Senna, the MV Agusta F4 750 Senna. Only 300 bikes were ever made, and all the money obtained from selling them went to the Ayrton Senna Foundation.

The Grand Prix circuit in Adelaide, Australia will remain in history as the last place where he won a race, and in his honor, the first chicane of the track was named the “Senna chicane”. In addition, one of the streets in the suburb of Wingfield is named after him. Some say that the Adelaide circuit was one of Senna’s favorite and he was unhappy to hear that F1 would move from Adelaide to Melbourne. During one episode of Top Gear that aired on July 25th 2010, the show paid a tribute to Ayrton Senna with Lewis Hamilton driving Senna’s legendary MP4/4 car, the one with which he managed to grab the title back in 1988. In that episode, Jeremy Clarkson revealed that a documentary film will be released in fall 2010.

The storyline of this documentary film revolves around Senna’s life and tragic death. The film follows his struggles both on track against his all-time rival, Alain Prost, and off it, against the politics that had a bad influence on the competition. We highly recommend watching this documentary film, even though you are not a big fan of motorsport racing. Senna was more than just a very good F1 driver; he was a truly remarkable person with a big heart and an exceptional personality.

There are many F1 drivers that managed to win the championship, but people will always remember Senna for the incredible way in which he managed to win his three titles. Fans will never forget his epic rivalry with Frenchman Alain Prost. I really believe that we won’t be seeing that fierce competition between two talented pilots anytime soon, which is a real shame, because without interesting battles like the ones between these two pilots, F1 or any other motorsport competition, is pretty boring.