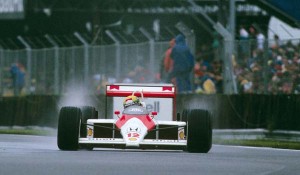 Ayrton Senna has strong ties with England, where the next race of the 2015 F1 season is taking place.

Besides competing in the entry divisions of Motor Sports in the United Kingdom and racing for British F1 teams, Senna also lived there, more precisely in Norfolk, East England.

The relationship is also special due to his achievements: he won more than 40 times in England, most of them in the entry categories of Formula One: Formula Ford and Formula 3. To celebrate the Brazilian’s good relationship with Britain’s racetracks, we’ve listed six unforgettable victories by Ayrtn Senna in the UK.

Senna`s win at Snetterton, a racetrack located less than 40 km from Norwich, East England, was one of the most spectacular in his career. the race was part of the 1982 Formula Ford championship. Starting in first place, the Brazilian had brake problems, but stayed in the race and won. When he stopped at the pits, the mechanics took notice that the front brakes were cold, since they were not used.

Senna`s first and only win at the British F1 Grand Prix. As a winner of several races at Selverstone in the entry categories, Ayrton fought for this victory since 1984, when he made his debut in Motor Sports most prestigious category. The race was dramatic. Starting in third place, Senna slipped to fifth at the green light, but took advantage of the wet track to give yet another amazing performance in the rain. Besides winning he scored nine points more than Prost, his rival for the title, who retired from the race. Senna would go on to win his first F1 championship.

Senna`s only other F1 win in England came about in 1993, but the race counted as the European Grand Prix, since there would be also a race in Silverstone, that year. The Donington Park racetrack had never hosted an F1 race, and it was criticized for offering few overtaking spots. Ayrton silenced the track`s critics by having what is considered the best lap ever, passing four cars, in the rain, in the first lap of the race. Driving a McLaren, Senna beat the powerful Williams and actually lapped the car that finished in third.

Already two for two at the start of the 1983 season, Senna faced a big hurdle to achieve his third victory in a row. In the final lap at Silverstone, after overtaking Martin Brundle by putting two wheels on the grass, Ayrton saw the fire extinguisher blow up inside his Ralt83. “It got freaking cold in there”, he joked. He kept going and won one day before celebrating his 23rd birthday.

After winning the first eight races in the season, Senna was well on his way towards the title. He had already broken Nelson Piquet’s record of six consecutive victories in the British F3, but the driver from São Paulo wanted more. He scored the pole position by setting a new record for the track and, in the race, crossed the finish line more than ten seconds before Martn Brundle, extending the record to incredible nine wins in a row.

After setting a record of nine wins in a row in F3, Senna had a difficult period, retiring from three consecutive races. The 13th race was his chance of keeping Martin Brundle from passing him in the overall standings. At the start of the race, Senna and his rival pulled away from the rest of the pack. Senna’s strategy to get away from Brundle was the same he would come to improve over the following years, in F1: he passed the backmarkers very quickly, leaving his adversary to deal with them in the track`s least favorable spots. By doing that masterfully, Senna won and paved his way to the British F3 title.