June 3, 1984: a day that has gone down in motor-racing folklore. For on that damp and soggy afternoon, a rookie, a relative unknown, announced his arrival on the world stage in spectacular style.

Driving a Toleman, this young man from Brazil, a certain Ayrton Senna, tamed the unforgiving streets of the Principality of Monaco, made all the more treacherous by a torrential downpour, as he embarked on his journey to greatness. 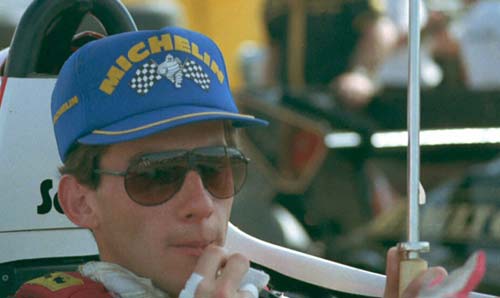 The 1984 season was Senna’s first in Formula One. As one of the hottest young stars making their way up through the ranks, Senna had grabbed the attention of Grand Prix teams like Williams, Brabham and McLaren, all world championship-winning outfits who kept a close eye on up and coming talent.

All three outfits had invited him to test for them over the course of the 1983 season but despite impressing during these sessions, neither could offer Senna a seat for the following year. And so the only option open to Senna – who after three years spent competing in junior single-seater series in England was impatient to make the step up to Formula One – was the Toleman squad.

An underfunded and uncompetitive team, all Toleman had managed to scrape together since making their debut in 1981 and until Senna joined the team in 1984 was a meagre haul of ten points. The team’s prospects didn’t look much brighter at the start of the ’84 season either and a loss of turbo boost pressure forced Senna to retire from the season-opening Brazilian Grand Prix, his home race.

Senna scraped together a total of two points from the next couple of races with a pair of sixth-place finishes in South Africa and Belgium. But a failure to qualify for the race in San Marino and another retirement in France meant the Brazilian arrived in Monaco having failed to finish in three of the five races so far. McLaren were the team to beat that year and the British outfit’s drivers Alain Prost and Niki Lauda had won four of the first five races.

The duo were locked in a fight for the title and Prost had duly taken pole position in Monaco ahead of the Lotus of Nigel Mansell. Securing a strong grid position in qualifying counts for more at Monaco than at any other circuit as the track — essentially a narrow, twisting ribbon of public road hemmed in by unforgiving Armco barriers – is notoriously difficult to overtake on. Senna had qualified thirteenth and had no hope whatsoever of challenging for the win at Formula One’s marquee event.

But then the heavens opened on Sunday and a torrential downpour drenched the streets of the Principality. Visibility was poor and the cliffs and some of the taller buildings surrounding the circuit located on the French Riviera were shrouded in cloud. The start of the race was actually delayed as a fire tender was sent into the tunnel, where the circuit was dry, to douse the track surface with water in order to even out the conditions.

When the race finally got underway, Prost led from Mansell and the two Ferraris of Rene Arnoux and Michele Alboreto, with the rest of the field enveloped in an almost opaque ball of spray thrown up as the field of 20 cars accelerated off the line. As the cars sped up the hill to Casino Square, the mist cleared to reveal the stranded Renaults of Derek Warwick and Patrick Tambay who had both come to grief at St. Devote, the first corner.

Meanwhile, invisible in the ball of spray, Senna had made a good start from thirteenth, the Toleman avoiding the stricken Renaults at the first corner, and had moved up to eighth. At the front, Prost led from Mansell, the leading pair pulling away from the two Ferraris of Arnoux and Alboreto and the second McLaren of Lauda, who had also moved up the order having started eighth.

The wily old Austrian was on the move and, on the fourth lap, dived down the inside of Alboreto’s Ferrari at the hairpin before charging past Arnoux on the run up the hill to Casino square a couple of laps later to move into third. In the lead of the race, his team-mate Prost, however, had hit trouble with the TAG-Porsche turbo engine in the back of his McLaren beginning to misfire.

Capitalising on the Frenchman’s misfortune, Mansell began to reel him in, the Briton seizing first position from Prost on the tenth lap to lead a Formula One race for the first time in his career only to lose it a few laps later. As he raced up the hill towards Casino Square, Mansell’s Lotus hit one of the painted white lines – as slippery as ice in the wet – and snapped to the right.

Mansell attempted to correct the errant car with a dollop of opposite lock only for the rear to step out in the other direction and slide lazily into the barrier on the outside, the impact dislodging the car’s rear wing and breaking its suspension. With Mansell out of the race, Prost was back in the lead with team-mate Lauda in second. But further back, with the treacherous conditions levelling the playing field, Senna had been making quiet progress in the Toleman. The Brazilian was up into seventh and harrying former world champion Keke Rosberg for sixth.

Both drivers gained a place when Alboreto spun his Ferrari at Mirabeau and Senna continued to pile the pressure on Rosberg, diving fearlessly into the rooster-tail of spray thrown up by the Williams, leaving no margin for error as he bounced his Toleman off the kerbs. Unable to withstand his relentless onslaught, Rosberg conceded fifth to Senna (which became fourth after Mansell’s accident). He then set off in pursuit of Arnoux’s Ferrari which also wilted before his charge. Senna was now in third – on course for his first podium – and was chasing, and catching, Niki Lauda.

Never a man with much regard for names or reputations when it came to fighting wheel to wheel on the racetrack, Senna swept past Lauda — a double world champion and already an established legend of the sport – round the outside of the curved start-finish ‘straight’ to take second. Now free of the slower McLaren, Senna unleashed the full force of his searing talent as he set about catching race-leader Prost. Absolutely revelling in the conditions that had caught out so many of his far more experienced peers, Senna started closing in on Prost at the rate of four seconds a lap.

At the end of lap 28, the gap between Senna and the leading McLaren stood at about 21 seconds. The next time the two cars crossed the start-finish line the gap had come down to 18 seconds, then to 15 seconds, then 11 seconds and finally seven seconds. The harder the rain came down, the faster Senna seemed to go.

“Well, I think we are watching the arrival of Ayrton Senna as a truly outstanding talent in Grand Prix racing,” 1976 world champion James Hunt remarked while commentating for the BBC. But while the Toleman driver was clearly relishing driving in the atrocious weather, Prost was far from comfortable in his McLaren and felt conditions were too dangerous for the race to continue.

As the Frenchman drove across the start-finish line he gesticulated from his car asking for the race to be stopped and on the 32nd lap of the 77-lap race, the red flag and the chequered flag were put out together in a controversial decision signalling the end of the Grand Prix. As Prost slowed to a halt on the home straight, Senna, still charging, flashed past and punched the air in delight. However, it was Prost who had won the race, scoring his and McLaren’s first victory in Monaco with Senna second. Stefan Bellof, another rookie finished third in his Tyrrell having started dead last on the grid.

Bellof’s drive was just as mesmerising as Senna’s but — with the German tragically killed in a sportscar race the following year – was overshadowed by the brilliance of the Brazilian’s future success. Though Senna was angry at the decision to stop the race, a decision which many rightly or wrongly felt was politically motivated, his performance was enough to shake the established order and cement his place as a champion-in-waiting.

He would go on to win the Monaco Grand Prix a record six times, but it was with that drive in the wet thirty years ago on his maiden outing in the Principality that Senna clearly marked himself out as a force to be reckoned with.

A new star was born that afternoon in Monaco, one that would go on to make such an impact on the sport as has rarely been felt before or since.