Leading from start to finish, from pole position to the 120th minute, Ayrton Senna da Silva won his first Grand Prix. That was the most significant event in Portugal. When Senna disappeared into the mist, his pit board showing plus a million minutes over anyone who tried to race him. 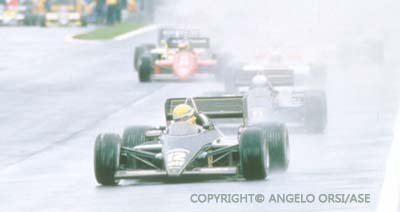 Senna had dominated the two dry qualifying days at Estoril, heading the times on Friday and lapping half-a-second quicker again on Saturday. His driving was smooth and clinically-precise. He made no mistakes. He even lapped quickly enough to be in the top six when his Renault engine was being throttled by a temporary fuel system mis-fire. His pole position – his first – came with a lap in 1min 21.007sec (so it will be remembered!) – 0.4 sec quicker than anything offered by Prost. But it wasn’t all as it seemed to be. Senna was quicker in a straight line on this lap by a considerable margin over his previous best.What he saw would have made Colin Chapman smile: the top of the rear wing had come adrift as Senna neared the end of the quick lap. In the cockpit, Senna felt the car jiggling around a little bit and assumed at the time that he had just passed the peak performance of his Goodyear qualifiers. Actually, he was feeling a reduction in downforce – and in drag. As the Lotus bobbled out onto the finishing straight, power oversteer clear to see, it picked up revs and speed. 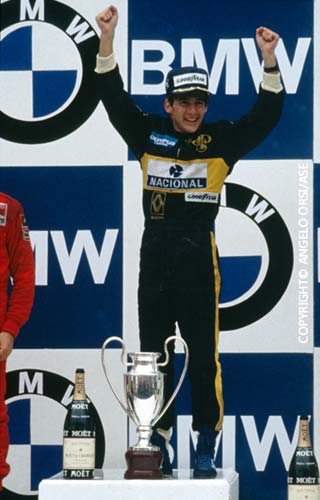 By the time Senna was back in the pits, smiling at the smiles, ready for the interviews,he was by then in the midst of something special. He had come to Portugal tanned and fit. He now runs regularly – about four miles a day – and he was delighted by the villa in which he was housed. He played beginner’s tennis and there was golf to watch there, too. He ran on Tuesday, perhaps a little too hard, and on Wednesday he came to the circuit. Dressed in baggy JPS shorts and shirt, his thoughts were of the recent sacking of Rene Arnoux and, perhaps, of the chance he might have had at Ferrari. “But I am very happy at Lotus,” he said. “Very happy. We have a very good car.

Lotus-Renault had the best qualifying combination in Estoril, and Ayrton Senna, as he now likes to be known, made the most of it. He was consistently half-a-second faster than his team-mate, de Angelis, and the aforementioned pole lap gave him an advantage over Prost.

On the grid, Senna sprayed his visor with de-mister. He had the inside line for the first corner, and, in theory, there would be no-one in front of him.The rain began to fall, 20 minutes before the start.  Behind, Prost climbed from his car and waited under an umbrella. His only worries were the brakes. At Monaco, in the wet last year, there had been a problem. Here, hopefully, they would be better. Senna won the start – and he made good use of it. He was leading clearly as they left the first corner, and Elio took second place behind him. Confident and calm, Senna drove the first lap hard.

He pulled out a lead, and did the same on lap two. Elio could match him for a couple of corners but then Senna was gone, out into a world of his own, where mistakes are rare, where Lotus chassis are a delight – and where the Reanult V6 turbo engine would be tailor-made for the conditions. Senna finished 63 sec ahead of Alboreto – but it could have been more. It was a dominant, sweeping victory, partly the property of Lotus, Renault and Goodyear but mainly owned by a young man.

“People later said that my win in the WET AT DONINGTON IN ’93 WAS MY GREATEST PERFORMANCE. NO WAY! I HAD TRACTION CONTROL OK, I DIDN’T MAKE ANY REAL MISTAKES, BUT THE CAR WAS SO MUCH EASIER TO DRIVE. IT WAS A GOOD WIN, SURE, BUT COMPARED WITH ESTORIL ’85 IT WAS NOTHING, REALLY.”

Every once in a while, during the race, the camera would move away from the cars vying for second or third, and search for Ayrton Senna, somewhere in the distance, faster than all the rest, even in pouring, I-can’t-see-a-thing rain. He raced alone, leading from the first lap to the last without any competition in a race that was treacherous at its best and, which had taken many victims.

It was a perfect weekend for the Brazilian, who took his first pole and first victory, while scoring the fastest practice time of the weekend, and in pouring rain, the fastest lap of the race – 1’44’’121s. Rounding off this impeccable, mature, and absolutely stunning run was the ease with which he pulled away from the others in the pack, increasing the distance methodically, from 15 seconds in the first few laps to over 1:02.978s by the end of the race. By this time, Senna had lapped almost every car on the track, except for Alboreto who took second place.