On 13 November 1985 I had my first interview with Ayrton Senna. It was in the kitchen of a modern detached house he and fellow countryman Mauricio Gugelmin were renting in Esher, a wealthy southern suburb of London.

We were in the kitchen because, judging by the empty rooms elsewhere in the brand new house, this was where the drivers spent most of the little time they had when not either racing or travelling back to Brazil. The strange location, seated round a pine picnic table, merely added to the slightly surreal feeling as I talked to a man clearly on his way to greatness. 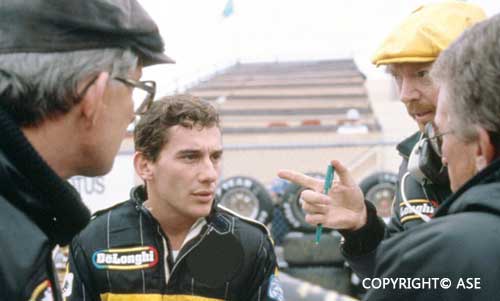 Senna had won his first Grand Prix that year with an epic drive in the rain at Estoril, conditions that allowed his natural ability to flow and make up for any deficit the beautiful black JPS Lotus-Renault may have had. It was only his second year in F1 (and first with Lotus), but already the 25-year-old had made his mark. Not that you would have known it during a chat lasting nearly an hour. Senna was slightly cautious at first (we’d never spoken, apart from questions at press conferences). But, with the help of Gugelmin and his wife Stella, who sat with us and helped devour a bowl of peanuts, Ayrton soon became thoughtful, engaging, funny and relaxed. There was none of the intensity that was quickly becoming his hallmark at race tracks. But I was soon to discover it at first hand.

A couple of months later, due to a misunderstanding over something he thought I had written, I received a massive bollocking in the paddock at Paul Ricard. Some months later, he eventually discovered his error but, having made such a public display of his displeasure, Senna never fully re-engaged with me as he had done during our interview. I was reminded of this – and much more – when watching ‘Senna’ in a cinema in Sao Paulo last Thursday. The documentary feature film is a powerful piece of work, telling the story of his 10 years in F1. You are left in no doubt that here is a charismatic, driven man, arguably on a level not seen before or since. But apart from providing an intensely revealing portrait, the film also tells a story of F1 itself; the incredible highs and the desperate lows that affect everyone.

Considering the hundreds of hours of film at their disposal (much of it courtesy of Bernie Ecclestone), the film makers have used brilliant editing skills to stitch together clips that allow a complex story to flow seamlessly in the limited time (100 minutes) available. The terrible thing is you know what’s coming the minute you see Ayrton switch to the unfamiliar blue and white overalls of Rothmans Williams Renault. You fear that this is going to become excessively emotional but, if fact, the Imola weekend is treated with care and tact. Indeed, for me, the previously unseen shots from within the Williams garage are the most touching of all, particularly when the camera catches Ayrton standing on his own, watching a replay of Roland Ratzenberger’s accident and then walking away, clearly distressed, when the doctors are seen briefly pumping the Austrian driver’s heart.

All of this adds to Senna’s deeply preoccupied look as he sits in his car on the grid. Not once do you see him produce that familiar slightly lop-sided smile. It’s obvious he does not want to be there. And the more you watch, the more you want to blurt out: ‘Please don’t race! Please don’t do it!’ I knew Senna had not been happy that weekend, but the film reveals so much more about this tortured man.

On the other hand, you could argue that the entire film is perhaps too heavy. There is little or no reference to Ayrton’s wry sense of humour. It came across during our interview in 1985 when he talked about paying back the Lotus mechanics for jacking his Mercedes road car on blocks and playing the old trick of shoving his face in a sticky bun when asked to check if the cream had turned sour.

“Bobby (Bob Dance) was the worst,” said Ayrton. “I got him in Brazil with a sweet that when you suck it, your mouth goes blue. It was the last day of testing and they went to the hotel for a shower and go to the airport. They were all in the same room. Bobby went to the toilet for a pee and suddenly he shouted out: ‘Shit! What’s happening? My pee is all blue!’ So, I got him nice…” I never got to experience that side of Senna even though events had finally moved on since our disagreement in 1986. Thanks to my work as a ghost writer for Damon Hill and his presence at Williams, a proper rapprochement with Ayrton was increasingly close at hand. I knew that when, for the first time, he smiled and nodded as we passed in the paddock. That was on the morning of 1 May 1994.

Maurice Hamilton is the author of twenty books, including ‘Williams: The legendary story of Frank Williams and his F1 team in their own words: The Greatest Story in British Motor-racing Told by Those Who Were There’