After winning the prestigious British Formula 3 title and impressing the Formula 1 world with his first test in the category (with a Williams, at Donington Park), Ayrton Senna still had to face a big and important challenge in 1983’s season: the Macau Grand Prix, which took place at the former Portuguese colony – now a Chinese special administrative region. 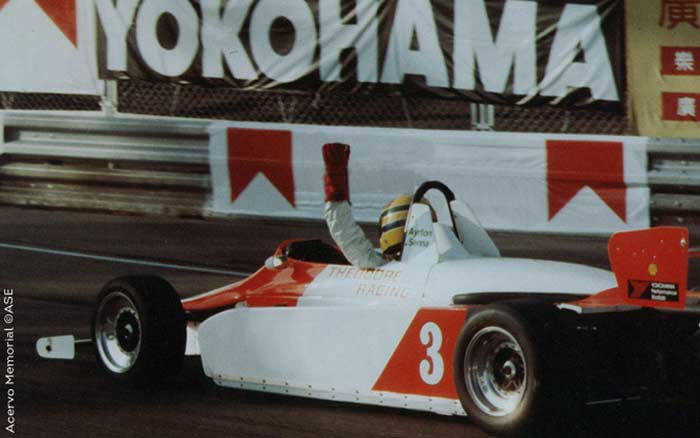 It was his first time with the quick F-3 cars in Macau, and Senna knew he had a good shot at winning – but he would have to overcome the fact that he had never driven on the 6.2 km circuit, with sections that were only 7 meters wide! The treacherous track is the reason why Macau is one of the most famous Grand Prixes in motor sports.

Driving team Theodore Racing’s Ralt RT3-Toyota, the Brazilian started the way he was used to: with the pole-position. By his side, on the first row, also driving a Theodore car, was Colombian Roberto Guerrero, who already knew the Macau track, having almost won there the previous year.Senna dominated the race and knew how to withstand the pressure from his more experienced teammate, Guerrero, who finished in second place. Rounding out the podium, another driver who would go on to F1 racing: Austrian Gerhard Berger.

A curious story took place right after the race, still in Macau. Senna had the race’s fastest lap, but thanks to a mistake on the timesheet Berger took the prize, leading to an unforgettable situation for the Austrian driver.