Former Ferrari Formula 1 test driver Luciano Burti says he only survived his 111G accident in the 2001 Belgian Grand Prix thanks to safety improvements triggered by the death of Ayrton Senna.

Burti crashed his Prost head on into the Blanchimont tyre barriers after a failed attempt to pass former Jaguar team-mate Eddie Irvine, with his car coming to rest under the tyre barriers. In an interview in the latest edition of The Autosport Podcast – available for free via all good podcast suppliers including iTunes and Spotify – Burti recalls the accident and the changes that followed to help other drivers. 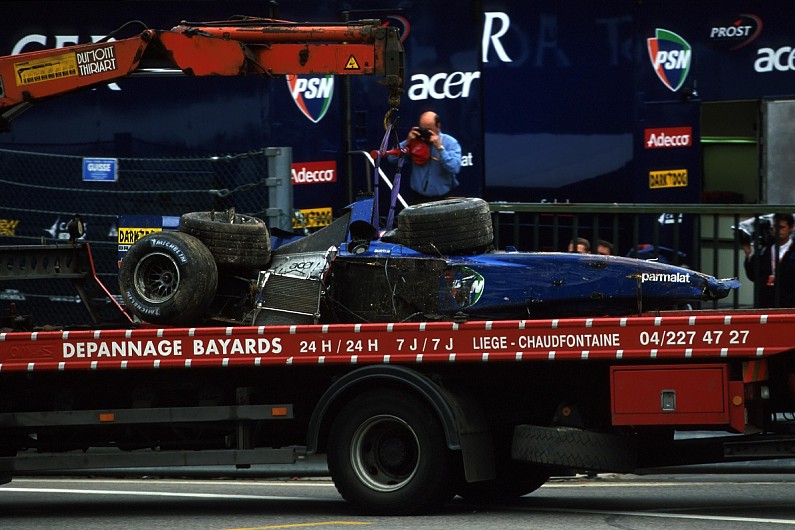 “It’s part of the human being that thinks bad things must happen to have the attitude to make it better,” said Burti.

“Spa was a huge crash when I crashed into the wall it was 270km/h, I had no brakes so I went straight to the wall and it was 111G on impact, which is a number I never heard before.

“If it wasn’t for Senna’s death, I wouldn’t have survived because Formula 1 became much better in terms of safety.

“From my accident, some things changed. For example, you can see that from then on all the tyre walls had blankets on top because my car was underneath the tyres.

“My helmet was broken in the front because we used to have a hole in it for the drink’s bottle or the radio but since then holes are not allowed.

“They always make things better from a bad experience like I had.”

Despite supporting such safety improvements, Burti believes the introduction of the halo last season was a step too far.

“I don’t like the halo, I don’t think it’s necessary,” said Burti.

“Maybe one day someone is going to get hurt from it or die from it [if the halo wasn’t there], well if you don’t want that happen let’s make a speed limit of 100mph maximum.

“Once you are going over 180mph you are taking a risk. F1 is safe enough and I hope they don’t try to make it bulletproof because that is part of the show.