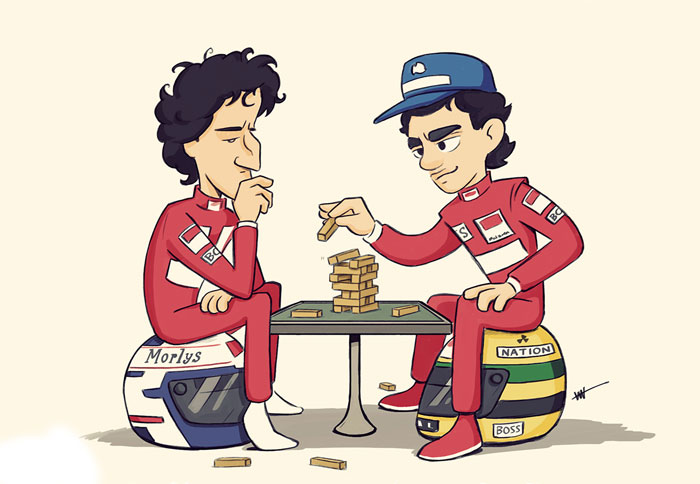 Mention contracts in a Formula One paddock these days, and folk will shrug derisively: “OK, so you have to pay more to get the guy…” Fifteen years ago, though, the breaking of them was relatively uncommon. “We’re not used to this,” Hawkridge said. “In the past a contract was always something you shut away in a drawer and forgot about. It isn’t worth a light if you have to look at it…”

I understood his outrage, sympathised with his decision to teach his driver a lesson, and wrote an Autosport column on the subject immediately before Monza.

On the bench he might have been that weekend, but still Ayrton went to the Italian Grand Prix. I had suspected, because he was one unlike countryman Nelson Piquet who devoured every racing magazine, that he might be a touch frosty, and I was right. When first he noticed me, in the Toleman pit on Friday morning, he resolutely avoided eye contact, just stood there, glowering at the sight of Johansson being strapped into his car.

I remained ‘in Coventry’ all that day, and most of the next, but when we bumped into each Other late on Saturday afternoon, he could keep quiet no longer. “Why the hell did you write that stuff? I thought you were a friend…”

That had nothing to do with it, I said. You signed a three-year deal with Toleman and now you’re leaving after one season. “Well, the Lotus thing has only come up recently,” he interjected. Come on, I said, Nigel Mansell told me at Brands (in July) that Peter Warr was trying to get him out of the team, to make way for you.

Senna fell silent for a few moments. “But it’s a better car,” he said finally. “It’s my career…” Of course, I said, but still the fact remained that Toleman, after giving him his first Formula One drive, had been shafted. “Well,” Ayrton responded, as if this justified everything, “I was going to Lotus this season, except that they weren’t able to get rid of Mansell, because of the sponsor…”

Convoluted thinking, it seemed to me, but we shook hands, and agreed to differ. I saw him again at the airport a couple of days later, and by now his mood had lightened. He could understand my point of view, he said, and respected my freedom to write as I saw fit.

Ayrton like this could be utterly disarming, and I began to slip from my high horse. You will win with Lotus, I said. “Yes,” he agreed, “for sure. I can win races with them but maybe not the World Championship…” It was as if his next move were already in the planning stage; probably it was.

In point of fact, he had very nearly won a race already, in the Toleman-Hart. At Monte Carlo, the sixth Grand Prix of his career, he had qualified only 13th, but the day was wet, and a combination of that track and those conditions was heaven sent for a genius in the bud: ninth on lap one, eighth on lap three, seventh on lap six, he relentlessly climbed the order, until, by lap 16, only the McLarens of Prost and Lauda were ahead.

They were in trouble, too, their carbon brakes snatching badly, thanks to uneven heat build-up in the torrential conditions. Ayrton passed Niki on lap 19, and set off after Alain, every lap taking seconds out of a sizeable lead. Even more remarkable, was that another novice, the lamented Stefan Bellof, was up to third in his Tyrrell and closing on both of them.

In fact, the red flag was displayed at the end of the 32nd, and as they went past it Senna actually passed Prost on the road, and briefly believed he had won. Thus, when he splashed to a halt at the end of his slowing down lap, he was not exhilarated by a brilliant drive, but livid that he was only second. Clearly, this was not a young man of ordinary expectations.

In repose, though, Ayrton could be ruthlessly honest with himself, and in those early days would even admit to weaknesses. In Montreal, a fortnight afterwards, if still incensed by the loss of what he felt should have been his first Grand Prix victory, he admitted that the rain had allowed him a priceless Opportunity to show what he could do. “If it had been dry,” he said, “the car would have been nowhere.”

True enough. But then he surprised me. “And neither would I.” How so? “I’d have got tired. I’m not really fit enough for F1 yet. To get used to the power, the speed, all that, no problem. The surprise for me has been the physical strain the races are so much longer than anything you do before.”

Early in the season, at Kyalami, where he scored his first championship point, 1 had seen Senna at the end of the race, looked on as the mechanics lifted him from the cockpit. It was unusual, certainly, but the day had been hot, and he had struggled most of the way with steering made even heavier by contact with a piece of debris. “It was very hard, that race,” he acknowledged, “but still I know I wasn’t strong enough.”

After that first season in Formula One, needless to say, Senna was never troubled by lack of fitness again indeed, like Prost, he worked endlessly on his physical condition, and none of their celebrated battles was ever resolved by lack of stamina, one way or the other.

Through that first season with Toleman, the car was wretchedly unreliable, but Ayrton made the podium three times, and by the end of the year none doubted that here was someone who would won be World Champion. The pity was that, as the boy became the man, so he built a shell around himself, lost his willingness to confide.