MP4/6 looked like its predecessor but inside was much different.

The car designed by Neil Oatley was looking similar to its highly successful predecessor McLaren MP4/5B but was quite different in terms of its aerodynamic profile. The chassis also went through some major modifications to accommodate bigger and heavier engine, while fuel tank was also enlarged. The new car struggled with an increased fuel consumption during the season and in several races, drivers were forced to drive very conservatively. 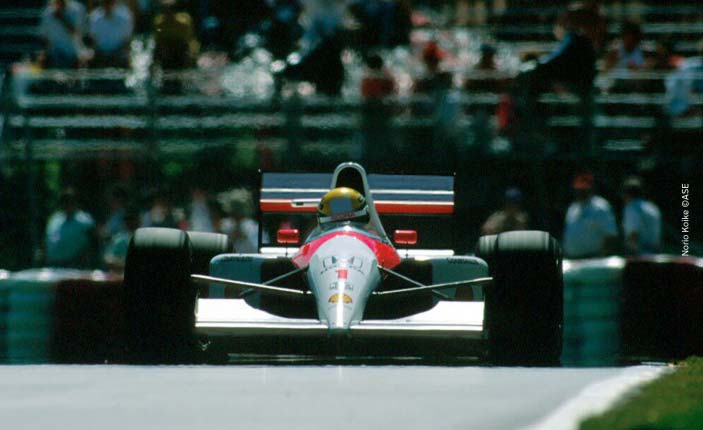 The McLaren MP4/6 was the car which marked 1991 Formula 1 World Championship when Ayrton Senna won his third and last title, while the team won its 7th title.

McLaren MP4/6 Honda looked like its predecessor but inside was much different
The car designed by Neil Oatley was looking similar to its highly successful predecessor McLaren MP4/5B but was quite different in terms of its aerodynamic profile. The chassis also went through some major modifications to accommodate bigger and heavier engine, while fuel tank was also enlarged. The new car struggled with an increased fuel consumption during the season and in several races, drivers were forced to drive very conservatively.

McLaren MP4/6 Honda at 2014 Goodwood Festival of Speed
Probably the biggest change was done with suspension. Instead of vertically installed, the new suspension was with pushrod-activated coil spring dampers mounted on top of the chassis ahead of the cockpit. During the season, Honda made an update of the V12 engine, while Oatley redesigned various elements on the car which pushed the team to the fourth consecutive Constructors’ Championship title.

The driver line-up for 1991 remained the same. Ayrton Senna was a reigning champion and he was supported by Gerhard Berger, experienced Austrian who struggled most of the campaign and had no less than 7 retirements, 6 of them because he had some technical failures. However, Senna was in fine form and led the team to another trophy even though he was skeptical about the characteristics and performances of the new Honda engine.

Brazilian ace had a perfect start of the season. Senna scored four consecutive wins, in US, Brazil, Imola, and Monaco, while his teammate was 2nd in San Marino Grand Prix and 3rd in Brazil. Canadian Grand Prix was the next on the calendar and was the team’s worst moment that year after both cars retired.

However, Senna topped the standings with an advantage of 24 points to the 2nd placed Nelson Piquet, while McLaren led Constructors’ championship having 31 points more than its closest rival Benetton. In the next four races, McLaren drivers weren’t able to core a win. Senna was 3rd in Mexico and France, Berger finished 2nd in the British Grand Prix and fourth in the German Grand Prix. Race at Hockenheim was the second and last that year in which reigning champion failed to pick points. At that point of the season, Senna’s advantage in the standings reduced to only 8 points to the Williams’ driver Nigel Mansell. In the Constructors’ championship, McLaren lost the lead to Williams which was a point ahead.

The alarm lights were lit after a stream of relatively poor results and after Hungarian Grand Prix the team bounced back with Ayrton’s triumph. The team scored another 1-2 finish at Hungaroring, with Senna scoring a 6th victory of the year. It was followed by two 2nd places scored by Senna, at Monza and Estoril. With three races remaining, it was clear that Senna will defend his crown. He was 24 points ahead of Mansell, but in the Constructors’ championship, the situation was tight after McLaren had just 11 points more than Williams. 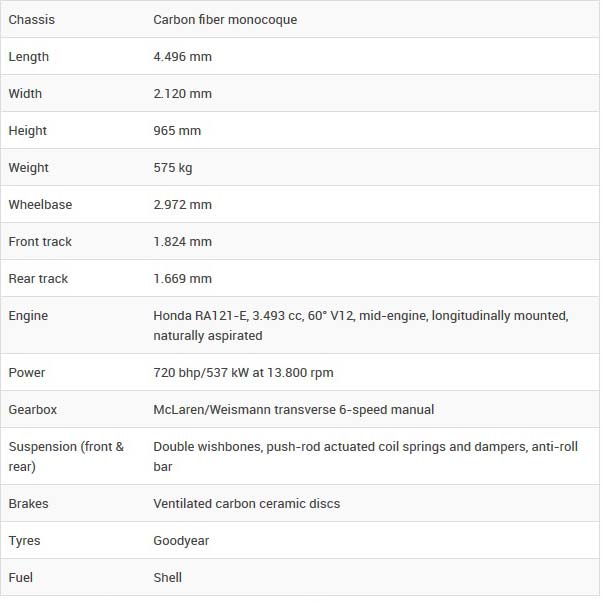 After Senna finished 5th in the Spanish Grand Prix, Mansell reduced the gap in the standings, but his hopes of winning the title ended in the penultimate event of the season. Gerhard Berger won the Japanese Grand Prix which was his only win that year, Senna finished 2nd and clinched the Drivers’ Championship title.

However, the battle for the Constructors’ championship title had to be resolved in the final round in Australia. McLaren had a solid 11-point advantage to its closest rival and he had another fine performance in Adelaide, Senna won the race, while Berger finished 3rd which was more than enough for another celebration of the Woking-based team.

The McLaren MP4/6 was also used in two opening races in 1992 before it was replaced with not so successful McLaren MP4/7A for the Brazilian Grand Prix and the rest of the season. The MP4/6 started in 18 Grand Prix events, scored 8 wins and 10 pole positions, and also has 5 fastest laps. It was also the last V12 engine (Japanese) that has won an F1 championship and the last car with an H-pattern manual gearbox that has won an F1 title.