Ayrton Senna’s win (his 41st) was the 104th for McLaren, a result that enabled McLaren to overtake Ferrari as the most successful team in 43 years of World Championship racing. Alain Prost was second in his 199th and final GP, then retired with a record (including 51 wins) which makes him the most successful of all drivers.

At the conclusion of their final racing confrontation Prost extended a hand of friendship to Senna, a gesture which swept away several years of feuding that had included deliberate collisions on the track. On the victory podium a misty-eyed Senna hauled Prost up onto the top step to share the limelight and embraced him warmly. Their peace pact was sealed with champagne, which they playfully showered over each other before discussing their emotions. 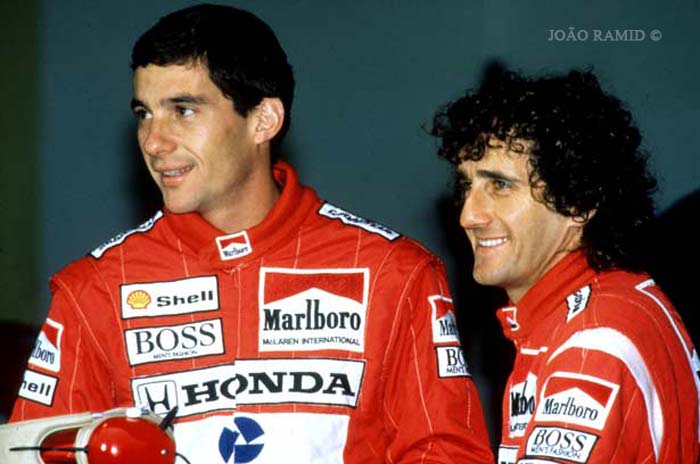 Senna, who moves to the Williams team next season to replace Prost, was overcome by the prospect of leaving McLaren after six years. The volatile Brazilian shed tears at the finish of the race and had to fight them back before the start. “I tried to keep my feelings very much under control because you cannot allow emotion to take over at such a critical time. In those last 15 minutes I couldn’t cope, I couldn’t control my feelings. Five minutes before it was so difficult just to clear my mind and concentrate for the race”

Prost admitted he was thinking “It’s the last time you will put on your helmet, the last time you put on your gloves, get in the car, think about the start – it was very difficult to keep the concentration. Mentally, it was not easy today, knowing it was the last race. I am very tired and have a strange feeling that I can’t explain.”

And what did Ayrton really think of Alain now that their often bitter rivalry was racing history? “I think our attitude on the podium speaks for itself. It reflected my feeling, and I believe his feeling too.”

Did Alain think they could ever become close friends? “I think only life will tell that. If you want to speak about the future you must also speak about the past and we don’t want to do that. It’s best that we remember only the good times we had.”

When Prost was asked how his life would change away from the intensity of F1 Senna interjected “You’ll get fat and lazy!” Prost disagreed but the two found some common ground when Senna revealed that “It’s never too late to change your mind” were the first words McLaren team owner Ron Dennis said to him after the race. “That’s what he told me too!,” replied Prost, and they laughed together.

They were further amused when Damon Hill, who finished third in the race, explained why his Williams spun to a halt in the middle of the track on the cooling down lap. Hill said it was the result of a failed attempt to celebrate the successful conclusion of his first F1 season by executing a deliberate 360 degree spin. Hill: “I thought I would do a doughnut but it turned out to be more like a croissant.”

Though they later kissed and made up a pre-race peace overture by Senna was rebuffed by Prost. Senna: “Alain has made his decision for a basically different way of life – to have more time with his family and get on with his life – and we should all respect his decision. I told him before – and I mean it – I wish him the best.” Prost: “I tried to shake hands with him very often and it did not work. The last time I tried to do that, one month later he crashed into my car at 260km/h deliberately (in Japan in 1990). So because I’m retiring I don’t think now is a good time to talk about peace.”

Senna, perhaps mindful of his forthcoming appearance (on December 9) before an FIA disciplinary committee, offered a tentative apology for punching Jordan driver Eddie Irvine after the Japanese GP. In Australia Senna said “I lost my temper which I regret very much.” A few hours later, during his pole position press conference, Senna lost it again in a profane outburst that will put him into deeper trouble with the F1 governing body. Incensed by British media criticism of his fisticuffs in Japan Senna accused journalists of not “having a clue of what a racing car is, no understanding of what it takes to drive racing cars, no understanding of the absurd and unacceptable behaviour of Irvine, etc, etc…