Keith Sutton remembers the beginning of his career simply. “I was a young lad from Cheadle with a passion for motor sport and photography,” he says. At the time, in 1981, he was only a year older than Ayrton Senna, who was just starting his full racing career. It was auspicious timing for both as they came together as keen youngsters, eager to make their mark.

Sutton would catalogue the Brazilian’s journey, from its opening through the moment it almost came to a premature conclusion, and from the triumphs through to its tragic ending at Imola on 1 May 1994. 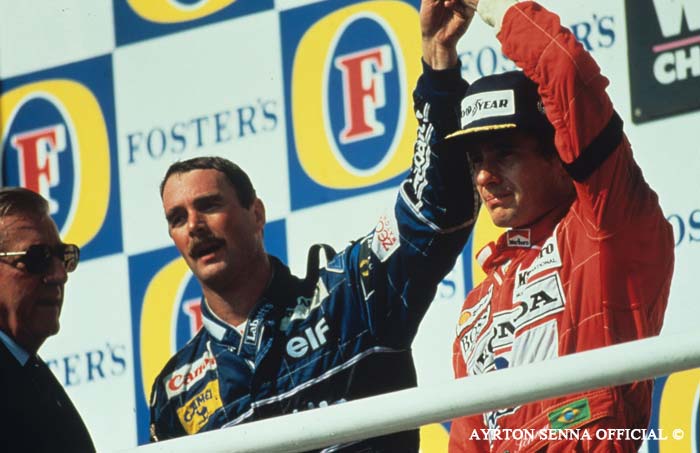 “Without doubt he was very special,” Sutton says. “More than anything he was so focused on what he wanted to do – determined. If you are like that you can get there.”

The pair had met at Thruxton, where Sutton was looking to forge his career in photography and Senna was competing in the Formula Ford 1600 championship. It was only his second race in a car, having already had considerable success in karting. The photographer followed him around, taking pictures for Brazil’s Auto Esporte magazine. A week later at Brands Hatch, Senna queried who the pictures were for and then asked Sutton to become his photographer, to send pictures back to Brazil. “I said: ‘Yeah, as long as you pay me,'” Sutton remembers with a light laugh.

“He said to me: ‘When I get to F1 I want you to be my photographer.’ And I went: ‘Yeah, yeah, whatever,’ as you do. But he was so determined, he knew exactly what he wanted and where he was going.” Within a year, though, it was a relationship that nearly went no further.

Senna won the championship in 1981 but announced that he was quitting racing on the podium of the final race . “It was a shock,” Sutton says. “I think that year the problem was that Nelson Piquet in the Brabham [run by Bernie Ecclestone] had won the F1 championship and was getting all the press coverage in Brazil, and Ayrton wasn’t getting anything. I think he had problems with his marriage, his wife was very pretty but very nervous and she hated the cold English weather. He later told me he was intending to go back and help his dad on the farm.”

Fortunately for racing, the track beat the tractor and in February 1982 Sutton had a call from Senna saying he was back to drive in the Formula Ford 2000 championship. The driver, who separated from his wife in 1982, told Sutton “he had sorted out a few personal problems back at home”. Success soon followed and, while still taking the pictures, Sutton offered to capitalise on it. “I’d noticed that in F1 the teams do a press release service so I suggested we do the same. He thought that was a great idea. I designed his headed notepaper with his helmet and the Brazilian colours.”

The press releases included a contact address – the basement of Sutton’s parents’ house in Cheadle. By night it served as a party zone with a bar, dance floor and DJ room, known as the “steering wheel club”; by day, it was his darkroom and the unlikely hub for spreading the word about Senna.

The Brazilian was proving his racing skills, winning the British and European Formula Ford 2000 championships in 1982, and by the time he was in a tight battle for the British Formula Three championship with Martin Brundle in 1983, people were really paying attention, helped by Sutton, who was now his photographer and PR. That same year he predicted (correctly) in his column for a Japanese magazine that Senna would be F1 world champion within five years.

“Bernie Ecclestone called,”Sutton says. “And he said: ‘I’ve been getting your press releases and I’d really like to speak to Ayrton and give him a test drive in the Brabham.’ I thought great, so I just put him in touch and then it all started.”

Senna went on to test for Brabham, Williams and McLaren in 1983 before winning the F3 championship in the final round and taking an F1 drive with Toleman for the 1984 season. He had made it to the top rung in only three years and, as he had promised, wanted to take Sutton with him. Senna offered the photographer a salary and travel expenses but he also wanted to own the copyright and insisted Sutton could only take pictures of his employer. This proposal was too restrictive for Sutton. “It was a privilege to be asked but I’d been thinking about setting up an agency so I had to say no. At first he took it pretty badly because he wasn’t used to people saying ‘no’ to him.

“It was awkward but to be fair to him, he very kindly said: ‘I appreciate what you’ve done and I still want you to be there at my first GP in Rio.’ So he paid for my flight and put me up in the Meridien Hotel at Copacabana beach. It was incredible.”

It would not be the end of their relationship. Sutton continued photographing F1 and Senna – “I took more photographs of him than any other driver,” he says – and came to understand the complexity of the driver’s character beyond the steely-eyed determination. Monaco in 1984 and his first win in 1985 were pivotal races, Sutton believes, and having been part of it, he understood that “as has been talked about time and time again, to succeed you always have to put people aside, you have to be ruthless”.

After Senna won his first title in Japan in 1988, Sutton was shooting him alone as the driver watched a re-run of the race on the big screen, waiting to be interviewed by Reginaldo Leme for Brazilian TV. “At the last question, Ayrton started crying, and I asked Reginaldo what the question was. He said he had asked: ‘Ayrton it’s been your dream to be the world champion since you were a small kid, but along the way a lot of people have helped you that you have had to push aside. Now that you’ve become world champion and reached your dream, will you remember those people?’

“Reginaldo was one of them,” Sutton continues. “He had known Ayrton since he was karting and he’d pushed him aside, all the people that had helped him. He knew what he was doing, he knew what he had to do.

“It was thinking of all those people that had moved him to tears.”

The end, at the San Marino Grand Prix, was too much for Sutton, who was also a close friend of Roland Ratzenberger – killed the day before Senna: “Everyone talks about that dark weekend at Imola but on the Thursday it wasn’t, people forget that. I saw Ayrton and he said ‘hello’ and he was chatting with the other two Brazilian drivers, Rubens Barrichello and Emerson Fittipaldi. I got some wonderful pictures of him smiling and laughing.”

The atmosphere soon changed. Barrichello had a huge crash on Friday and Ratzenberger died the following day. “That really hit me badly,” Sutton says. “It affected me more at the time than Ayrton’s death. I was in a daze on Sunday, I didn’t really want to be there, like everyone else.”

“It was another month before it hit me about Ayrton. My friend Johnny Herbert [then driving for Ligier], who knew them both very well, was strong and comforted me. He flew to Brazil for Ayrton’s funeral and then came straight back to Salzburg for Roland’s funeral. Not many people did that.”

Sutton is convinced the fight between Senna and Michael Schumacher would have been one of F1’s greatest battles but enjoys his earliest memories of the Brazilian the most. “We were the same age, we talked about normal things, music, movies, girls, and we both wanted to get to Formula One,” he says. “I’d been there at the start and that was fantastic.”