Every year on the first of May, many people make a pilgrimage to a walled corner of a certain racetrack near Bologna, Italy. They decorate the wall with pictures, poems, flowers and collect souvenirs and keepsakes. Halfway round the world, across the Atlantic Ocean, several others visit a grave at the Morumbi Cemetery in Sao Paulo, Brazil. Some are moved to tears, while others just stand in silence, reminiscing and reflecting on the past.

The plaque reads, “Nada pode me separar do amor de Deus” – Nothing can separate me from the Love of God. It has been more than twenty years since the tragic race of the San Marino Grand Prix of 1994 which claimed the life of, arguably, the greatest driver ever to have graced the pinnacle of motorsport – Ayrton Senna. Widely considered as the darkest weekend in the history of Formula 1, it left an irreversible mark on the sport – one that continues to be remembered with quite a heavy heart. 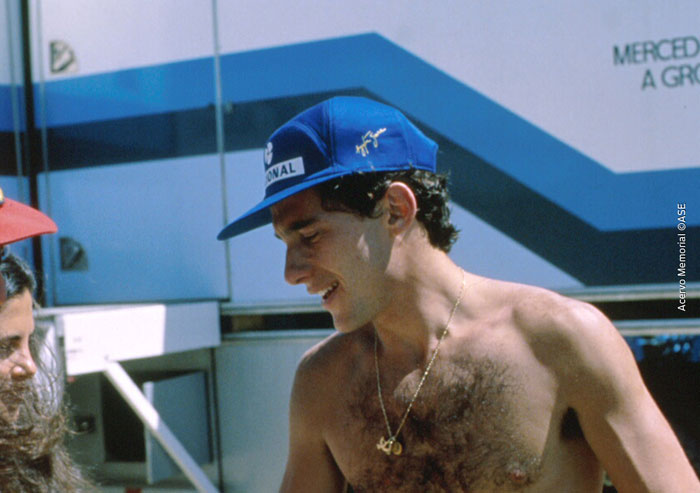 Several people have asked me how the life (and death) of a man who perished while I was a mere toddler could influence my life in the slightest possible way whatsoever. I never had a memory of a tragedy or any knowledge of the existence of such a man until a few years ago when I started watching Formula 1 racing. At first, it was like any other sport – an instrument of entertainment over the weekends where a bunch of men drove around in circles in fast cars with the aim of beating each other to the chequered flag. It was only when I began following the sport closely that I realized that it was quite unlike anything else.

In a world where the greatest sporting tragedy could mean the loss of a One Day International and winning a Tennis Grand Slam or the Football world cup is likened to unsurpassed esteem, it is Formula 1 that stands out among all sports in all its resplendence. Of course, the sport is only a shadow of its former self, but that does not diminish its beauty in any way. Formula 1 racers are not your regular sportsmen who go out onto the field, perform to the best of their abilities and then return home to ponder over the two big impostors in their lives – Victory and Defeat – but heroic men who risk their lives for the ultimate glory of victory. And certainly, Ayrton Senna was amongst the greatest of them.

If Formula 1 cars had number plates, Senna’s would’ve read EGO 1. He drove like a man possessed and believed he had the God-given right to win. Over the years, several great talents have driven in the sport. Big names such as Fangio, Clark, Stewart, Lauda, Prost and Schumacher. But none of them were as charismatic as the inimitable Brazilian. “Being second is being the first of the ones who lose” he would say.

He would go to great lengths in his pursuit of victory – one that led to several clashes, most notably with Alain Prost. Senna and Prost were a part of the greatest rivalry ever to be witnessed in the history of the sport. Senna’s determination to win manifested itself in the form of aggressive driving on track. It resulted in a controversial collision at the 1989 Japanese Grand Prix, where he tried to take the lead from Prost. That earned him an unfair disqualification, which effectively handed the title to The Professor. Senna, however, avenged his loss at the same race a year later where he took Prost out to win the championship. It was a very dangerous thing to do but in his head, justice had been done.

Senna’s motivation to drive in Formula 1 was neither money nor fame. Although he came from a privileged background, he had to make certain sacrifices to follow his passion. However, it was not just a seemingly unreasonable desire to win either. Above everything else, he was driven by the need for perfection and a sense of purpose. Senna was a highly religious man who said he discovered God through racing. After the historic pole lap at the 1988 Monaco Grand Prix, where he out-qualified his teammate Prost by a mind-blowing one and half second, he described his experience in the car as something that transported him into another realm. Indeed, after a certain point, it looked like he was no longer driving the car consciously.

Whenever it rained during a race, much to his delight, he was unbeatable. Some of his greatest victories came in the most dreadful of conditions. Monaco ’84, Portugal ’85 and Donnington ’93 are only the beginning of a long list of astounding performances. It was an absolute treat to watch him dance in the rain, transcending the limits of his car, leaving his rivals far behind on the road to victory. Such was his brilliance in the wet that one was left to wonder if the God of Rain was his co-pilot. His impeccable skill in handling the car under treacherous conditions could be matched by none. Schumacher, perhaps, comes the closest.

The answer to the question of who the greatest driver in the history of Formula 1 is a matter of intense debate and personal opinion. But two names constantly show up at the top of every list of all-time greats – Senna and Schumacher. Michael Schumacher is a driver who leads a majority of the sections in the records book. But sport isn’t about mere numbers and anybody who thinks the contrary certainly cannot call themselves true fans. Schumacher was a racer driven by the ruthless precision of his genius; Senna’s passion stemmed from his heart. If Formula 1 were a movie, Schumacher would easily resemble the monstrous Ivan Drago and Senna, Rocky Balboa.

If Schumacher was a warrior who could wield his powers with the greatest skill, Senna was a saint who was at harmony with his mystique, victory his only salvation. Someone recently drew a beautiful analogy that describes this comparison perfectly – “Michael Schumacher is probably the greatest racing driver of all time in the same way Michael Jackson’s Thriller might be the best album ever made if you look only at the numbers. Senna is more like that famous old story about the Velvet Underground, who might have sold only 30,000 copies of their first album, but everyone who bought one of those 30,000 copies started a band.”

But what exactly makes Ayrton Senna the greatest driver of all time? Why is he revered the way he is? Is it the brilliance that enabled him to drive a wretched piece of machinery to the podium on the streets of Monte Carlo? Or his determination which took him to victory at home in a car that was stuck in 6th gear? I cannot pretend to know him nor have I seen him race, but after having watched countless hours of old videos, races and interviews, I am convinced that he is definitely not your regular Formula 1 champion.

Senna had great charisma and an amazing character that set him apart from the 700-odd others who have raced in Formula 1 to date. He had an aura about him that distinguished him from his peers. On the track he was a ruthless racer but off it, he was capable of great compassion. He was emotional, but also had immense will power. Senna had humility even after he achieved God-like status. He constantly pushed himself harder, testing the limits of his boundaries and endurance. In a sport where champions are common and legends fewer, he was something very rare to come by – a hero.

Over the years, motorsport has claimed the lives of several drivers. But none of them shook the world the way Senna’s did. His untimely end left many people all over the world devastated, the Brazilians more than anybody else. They had not only lost a champion but also their joy and pride. It is hard to imagine him coming out of the mangled remains of his car alive, walking away from it like it was not a huge accident. It would be a sacrilege to speak of what he may have achieved had he lived, but there is no doubt that Michael Schumacher would’ve had a very tough time etching his name in the history of the sport.

The famous journalist John Bisignano couldn’t have put it better – “It was an end befitting his legend in a poetic, unjust way, cruel as it may be”. Whenever someone talks about Ayrton Senna, they always remember his tragic end with a sad heart. But I’ll always remember how he raced – determined, uninhibited and passionate. He proved to the world that with passion, determination and belief in God, there is nothing that cannot be achieved. Nothing has been more inspiring in my life than watching him race around the track in his gleaming yellow helmet as he drove towards victory.