For better or for worse, watch ambassadors have become an indispensable part of the marketing landscape these days. Some of them have a genuine affinity with the brand they’re representing, some see their watch deal as just another in their portfolio of brand endorsements. While the ambassador concept has begun to wear a little thin in some markets, I have to confess that a big part of the reason that I started getting interested in TAG Heuer was because it was the watch worn by my favourite sportsman: Ayrton Senna. 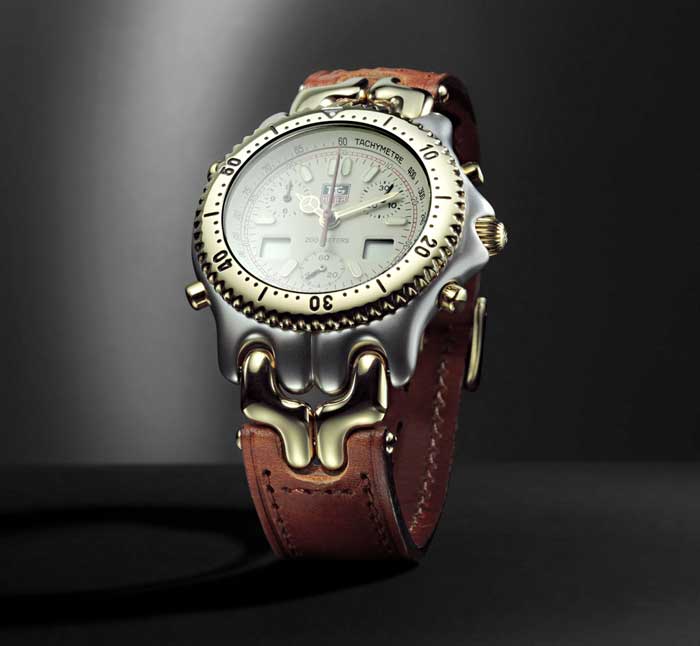 Senna was the perfect ambassador for TAG Heuer- yes, he won lots (which helps), but he also had global appeal and there was something about him that made him more than just a fast driver. TAG Heuer used Senna in its “Don’t Crack Under Pressure” campaign, and anyone who saw Senna’s qualifying laps knows that it was when the pressure was on that Senna was at his best.

And importantly, Ayrton Senna wore TAG Heuer watches, and you can check out this article for an overview of his personal collection. TAG- the investment arm of the Saudi Ojjeh family- had been a sponsor of the Williams team for several years, but decided that they were looking for much more than a simple sponsorship arrangement.

In conjunction with Marlboro, Ron Dennis was able to force a merger between his Project 4 team and the McLaren team run by Teddy Mayer. Ever wondered why all McLaren race cars- and the new road car- since 1981 have had the MP4 prefix? That stands for “Marlboro Project 4”- the name of Ron’s original team. And joining Ron Dennis in this new enterprise was TAG, which took a 50% ownership stake in the newly named McLaren International.

TAG famously paid for the development of the 1.5 litre Porsche turbo engine, ensuring that the championship winning McLarens of 1984, 1985 and 1986 were known as “McLaren-TAG”. The “TAG” engine continued through to 1988 when a new era began. Ayrton Senna had been a successful driver for Lotus since 1985, and while he had won the occasional race (six over three years) and taken many pole positions, the Lotus team was unable to produce the reliability and speed that Senna demanded. The Lotus team was on an unfortunate decline since the death of Colin Chapman, although the team had some success with Honda engines in 1987, winning twice. However it was no surprise when it was announced that Senna and Honda would be moving to McLaren for the 1988 season. Lotus kept their Honda engines and “gained” the 1987 world champion Piquet, but it was pretty clear that McLaren had the better deal.

The relationship between Senna and McLaren produced three Drivers World Championships and 35 wins and was once of the most talked about era’s in Grand Prix racing, with his legendary battles with Alain Prost on the track, and the FIA off the track. At the end of 1993 Senna left the McLaren team to move to Williams-Renault, a partnership that lasted only three races before that terrible crash at Imola that took his life on 1 May 1994.

Senna’s move to McLaren marked the beginning of the relationship between Senna and TAG Heuer, with Senna appointed as the brand ambassador for the then-new S/el line of watches (“Sports and Elegance”). In fact, Senna’s daily watch was the Analogue/ Digital TAG Heuer S/el (below), which he wore on a leather strap.

Senna appeared in a range of advertising for TAG Heuer, as well as carrying sponsorship on his racing suit and on his McLaren. But despite these links, TAG Heuer did not produce the first Senna Limited Edition watch until after he left McLaren in 1994. The TAG Heuer 6000 Senna Limited Edition was the only one of the Senna watches created while he was alive and with his involvement. You can quickly pick the The Senna 6000 (Ref WH1114) over a standard 6000 Series by the famous “Senna S” on the bottom of the case, instead of the TAG Heuer logo of the standard model. 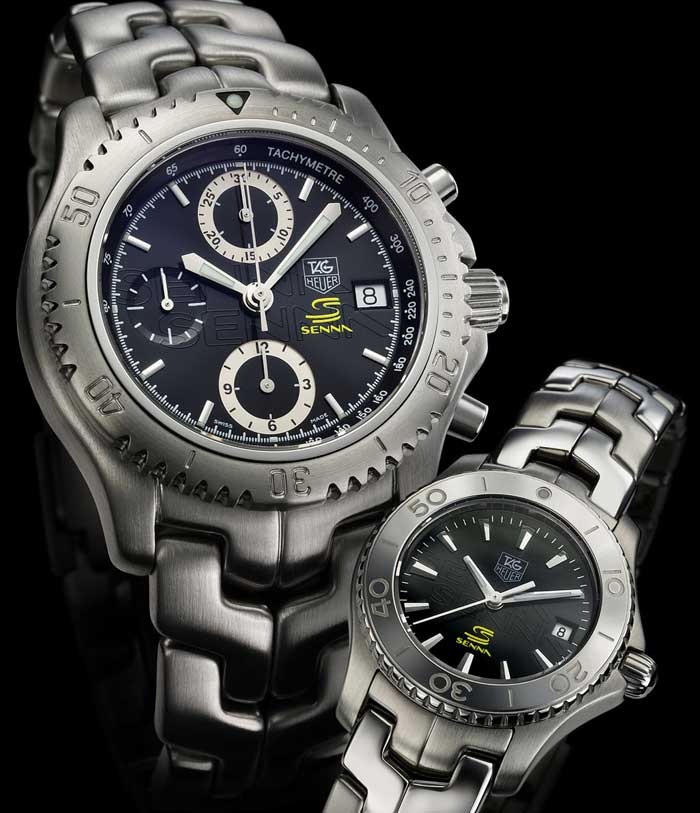 The 6000 Senna features a bespoke dial, including two chequered flag patterns at the top and bottom of the dial. The watch was available in three sizes- Mens, Boys and Ladies- with 1,000 of each size made. The second Ayrton Senna TAG Heuer followed five years later in 2001, when the first of the Link Senna Chronographs was released (Ref. CT2114). This series was a Limited Edition of 1,991 watches, to signify the year that Senna won his last Formula 1 World Drivers Championship (1991).

Like the 6000 Senna, the Link featured the “Senna S”, which this time was subtly embossed on the dial- you can only see the logo when the watch is viewed at certain angles, such as the photo below.  Next up in 2002 was the third Senna edition (Ref. CT2115), which holds the record for the strangest link between an event and the number made. There were 4,098 watches made- to mark the total number of minutes elapsed in the 41 races that Senna won. Also based on the Link series, the third LE switches from a Red to Yellow colour scheme, to match Senna’s famous Yellow helmet. These Yellow markings can be seen on the central second hand and the tip of two sub-dial hands.

The 2003 model (CT5114) was a gentle update to the previous version in terms of looks- thick white “Daytona” style rings were used on the 12 and 6 o’clock sub-dials, while the dial no longer carries Senna’s signature. Also note that several of the Yellow highlights have gone, with the only Yellow on the dial being the Senna name and “S” Other changes included the back of the watch, which now featured a colored logo of Senna’s helmet instead of the “Senna S”.

This fourth Limited Edition was the only watch in the series to feature a Chronometre movement- in this case, the Chronometre-grade version of the Calibre 16 (ETA 7750) movement. The fourth series was available as a limited edition of 4000 watches. The final of the TAG Heuer Senna watches was released as a Limited Edition of 2,004 watches in 2004 to commemorate the 10th anniversary of Senna’s death. This last version marked a significant changed in style for the series and was based on the re-designed 2004 Link. The 2004 Senna Link (Ref. CJF2113) carries only a few markings to differentiate the watch from the standard TAG Heuer Link- the Green sub-dial hand and Senna’s signature.

For several years the Senna and TAG Heuer partnership lay dormant, with other watch brands releasing their own Senna branded watches. These always rung hollow to me, as many of these brands had zero connection to Senna, making it a true marketing exercise. As recently as 2014, the rights to produce Senna watches sat with Hublot, but in 2015 TAG Heuer have licensed his name and image- this time for a range of sunglasses.

It might not the the same as a new limited edition Senna watch, but at least the fact some relationship exists opens the possibility down the track when those existing watch arrangements expire.  The Senna TAG watches are some of the most collectible of the modern TAG Heuer watches. In fact, they are the natural extension of Heuer’s relationship with the 1970s F1 stars- TAG Heuer continuing down the path started by Heuer. Like the Ferrari’s of the 1970s, Senna’s McLaren also wore TAG Heuer sponsorship- just like the 2015 McLaren-Honda.

Of the Senna series, it’s the first watch that I believe is the most special, because it’s the only one that Senna himself helped design- a true Senna watch, rather than a watch “inspired” by Senna years after his death.

Senna’s fans will always associated him with TAG Heuer and the famous McLaren’s part owned by TAG that he drove during the peak of his career.