In 1985 the price of a grandstand seat at Estoril was about the same as the average weekly wage, and as well as that the weather on race day was atrocious. Only around 10,000 people were able to say they had been there when Senna won for the first time. 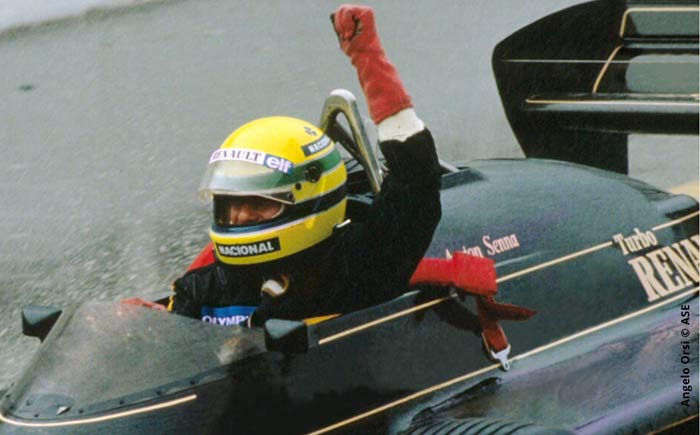 Many have suggested that Ayrton’s greatest drive was at Donington’s one-off European Grand Prix in 1993, when he went into the first corner in fifth place, yet completed the lap in the lead. Run over the Easter weekend, and in terrible conditions, the race was watched by a meagre crowd, but although Tom Wheatcroft took a bath financially he always said he didn’t care: he had persuaded Bernie Ecclestone to let him put on a race at his beloved circuit, and it would always be remembered for Senna’s virtuosity. At Imola, the next race, I asked Ayrton if he thought the Donington victory his best to date. He made a face…

“No! For sure it was a good one, and not easy – but it wasn’t like Portugal in ’85. At Donington I had a Cosworth, but in Estoril it was the Renault turbo – so much more power! But the biggest difference is that now we have traction control, and then we didn’t…”

Leading from start to finish, from pole position to the 120th minute, Ayrton Senna da Silva won his first Grand Prix. That was the most significant event in Portugal.