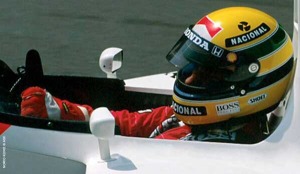 The exceptional powers of concentration which helped Ayrton Senna capture three Formula One world championships were brought sharply into focus today for the young drivers pursuing their own path to the top in Abu Dhabi.

“Top class racers in motor sport work at the limits of their abilities and require immense concentration levels to sustain their focus over long periods,” says Dr. MacIntyre, Lecturer In Sport, Exercise and Performance Psychology at the University of Limerick in Ireland. “Although many current racers work with sport psychologists, Ayrton Senna was the greatest exponent of psychological skill. He mastered many techniques and strategies and could explain it easily as his sister was a trained psychologist.

“For example, Senna could visualize a “qualy” lap in the same time it takes to drive it, such was the realism of his visualizations enabling him to make accurate predictions of the car in advance.” Organised by the Automobile and Touring Club of the UAE the Abu Dhabi qualifying event is one of six being staged worldwide. A total of ten young drivers, including one selected at Yas Marina Circuit, will win a place in next year’s fully funded Academy programme to develop young talent and promote safety in motor sport.

“Obviously, one of the main objectives is to assess and develop the guys’ driving skills,” said ATCUAE President Mohammed Ben Sulayem, the FIA Vice President, “But the classroom session are just as important, and the winner will the one with the best all-round performance on and off track.” Among those attempting to win the one Academy place available in Abu Dhabi this week are  the UAE’s Mansour Al Helei, Kuwait’s Ali Makhseed, Oman’s Anas Al Raeesi and Lebanon’s Patrick Njeim. The other drivers are from Cyprus, Egypt, Iran, Kazakhstan, Morocco, Sudan, Syria, Tunisia and Georgia.

The young drivers today faced a series of computer-based tests to examine their hand-eye co-ordination and reaction time, concentration and alertness, emotional control and visualization abilities.  “Without a robust psychological approach, a driver may miss opportunities when they present themselves,” said Dr MacIntyre. “Poor concentration has potentially dramatic consequences including crashing, but not capitalising on an overtaking opportunity because of your lack of stress control  loses races.”

The qualifying event includes a variety of driving tests, and with competition intense for the one Academy place, the classroom sessions could prove decisive. All drivers will be ranked based on the objective measures of psychological performance across the five tests of mental control, and this should easily differentiate the driver with the best potential,” said Dr MacIntyre. “With further development of psychological skills. the drivers can achieve their vast potential in the full academy programme.