It was the event in which Senna truly, after dropping several hints in the four seasons since his F1 debut, announced his arrival on the world stage. The Brazilian out-qualified Alain Prost, his McLaren teammate, by a margin of 1.427 seconds around the streets of Monte Carlo. It is often said in F1 that the most accurate measurement of a driver’s true ability is his results in comparison to his teammate, who has access to an identical car. 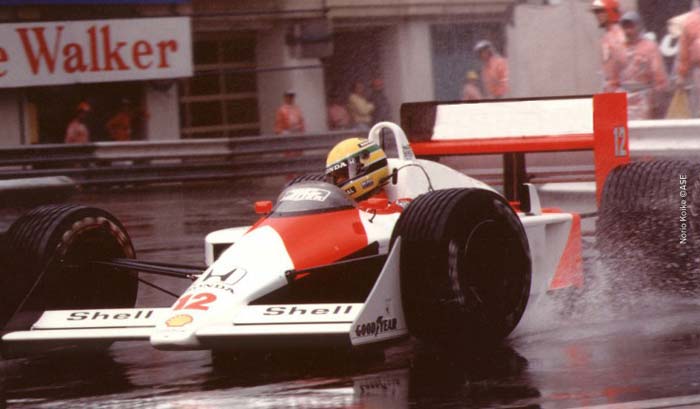 This is amplified in qualifying, when cars are trimmed down, fitted with the fastest tyres and given lowest fuel load with the aim of posting the quickest possible lap time. It is even more significant at a street circuit such as Monaco, where the barriers are threats rather than safety mechanisms and where the driver, rather than his car’s aerodynamic efficiency, is the decisive factor. That the 28-year-old Senna, with only seven grand prix victories under his belt, managed to out-qualify the 33-year-old Prost, a winner of 29 races, two world championships and with four more years of experience to rely on, was staggering.

Senna’s complex personality and poetic description of that lap, arguably the greatest in the history of Formula One, has left what the Brazilian meant by his lack of “conscious understanding” open to interpretation. Some, as BBC Sport’s Andrew Benson has referred to, have claimed that the Brazilian had something of an out-of-body experience as he waltzed his McLaren MP4/4 around the French Riviera—but that theory is almost certainly incorrect.

Instead, Senna experienced a relaxed intensity, a calm ferociousness, which allowed him to disregard the external and, as he effectively said himself, operate solely on his subconscious mind. It is a sensation that musicians in particular can relate to: whilst beginners or the less-skilled feel as if they must focus all their energy on hitting the right note, flicking the right key or plucking the right string, experienced players and those with music within their DNA can play with ease. They can instantly change chords without looking, hum or sing a melody with their eyes shut and take part in a full-blown conversation whilst finger-picking a guitar solo.

Senna’s pole lap, then, was not just a driving masterclass but a case study of creative, artistic and emotional intelligence and evidence of his single-mindedness, determination and obsession. In typical Senna style, however, that determination could be his greatest enemy as well as his finest asset. After you’ve reached perfection, the summit—as the Brazilian did on 14 May 1988—the only way is down. And Senna was brought back down to earth within 24 hours, when the conscious understanding that he felt was absent in qualifying returned with a vengeance.

You know the story: Senna continued exactly as he did the previous day, establishing a lead of almost a minute over Prost. On Lap 67 of 78, however, his race ended after a crash at the Portier corner shortly after the Brazilian received a radio message from McLaren team principal Ron Dennis, which instructed him to ease his pace and cruise to the finish. The cause of the crash was officially recorded as a loss of concentration, and while that certainly was true, as Dennis’ radio call had interfered with Senna’s equilibrium, there was slightly more to the incident than that.

Prost, who had lost second place to Gerhard Berger at the start of the grand prix, finally made his way past the Ferrari at St Devote on Lap 56 and—with the benefit of clean air—began to confirm McLaren’s dominance over the rest of the field by recording some very fast laps. And although Senna had made Prost look like the junior driver in qualifying, the Frenchman was displaying just why he was among the most decorated drivers on the grid.

Prost’s pace, which led to him taking six seconds out of Senna’s lead in a single lap, sent the Brazilian into an irrational state of panic. Worried that the race would be snatched from his grasp, despite being only 11 laps from the chequered flag, Senna picked up his pace. But, unlike in qualifying—where his speed simply oozed from him—he was now forcing it out. Naively, he attempted to consciously control the subconscious, ultimately losing the battle of wits when he bent the suspension arm of his McLaren on the seafront. And despite the events of qualifying and the drama of the race, it was what happened next which would define the rest of Senna’s life and Formula One career.

Senna’s body language and facial expressions immediately after the accident, above, beautifully encapsulated the Brazilian’s introverted, reflective character. While some drivers choose to keep their helmet on after a race-ending incident (usually a sign of embarrassment), throw their gloves to the ground or curse under their breath, Senna bottled his fury within. No head shaking, no arm waving—just pure anger bubbling and boiling behind his eyes. That he fled to his nearby apartment for the remainder of the day, instead of returning to the McLaren garage, showed just how mortified Senna was.

He couldn’t bear the thought of facing his team. He couldn’t accept what had occurred and how foolish he had been to allow such an elementary mistake to creep into and tarnish his faultless weekend.  Jo Ramirez, McLaren’s team co-ordinator at the time, described his struggles in contacting Senna after the crash to Tom Rubython, author of The Life of Senna, stating:

“I kept ringing the apartment but the telephone didn’t answer. Finally, at 10pm, the telephone was answered by a Brazilian woman who used to look after the flat. So in Portuguese I said that I knew Ayrton was there, and could I please talk to him. She insisted that he was not there but I said I knew he was, he just didn’t want to talk to anyone, but that I needed to talk to him. Eventually Ayrton came to the phone and he was still crying. He said: ‘I don’t know what happened—the steering came off in my hand.”

After he’d calmed down and pulled himself together, Senna went on to win six of the next eight races, claiming a podium finish at every grand prix for the following four months until the Italian Grand Prix at Monza—the one race that McLaren failed to win in 1988. The penultimate round of that season, of course, saw Senna claim his first world title at Suzuka, only after which he would openly discuss the Monaco mistake. He is quoted by Rubython in The Life of Senna as saying:

“Monaco was the turning point in the championship. The mistake I made woke me up psychologically and mentally and I changed a lot after that. It gave me the strength, the power and the cool mind to fight in critical situations. That was when I took the biggest step in my career as a racing driver, as a professional and as a man.”

I have to say that it brought me closer to God than I’ve ever been and that has changed my life completely. I am a better human being now than I was before. I am better in everything I am and everything I do. The accident was not just a driving mistake. It was the consequence of a struggle inside me, which paralysed me and made me vulnerable. I had an opening to God and another to the devil. The accident was a signal that God was there, waiting to give me a hand. I just had to tell him what I wanted. “