Donington Park hosted the 1993 European Grand Prix, located in the small town of Castle Donington, England, the circuit provided F1 fans with an unforgettable Easter Sunday. The first and the only time an F1 Grand Prix took place in the circuit. It started to rain on the race day, accompanied by fog and mild temperature, a typical British weather. Little did Senna or the rest of pack know, the stage was set for what would be considered the ‘Greatest lap in the Formula one’ history. 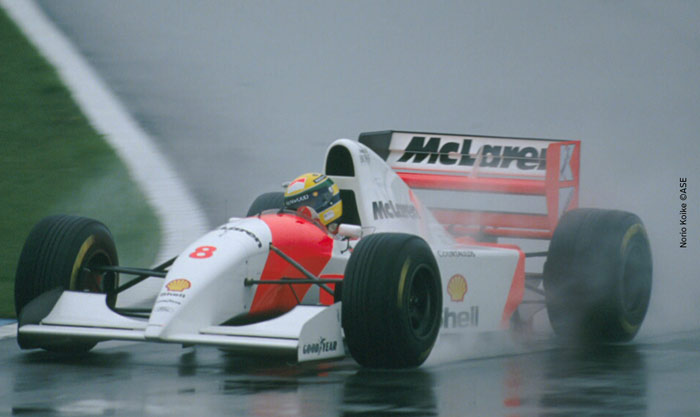 Ayrton Senna sat fourth on the grid alongside Michael Schumacher in third, the first row had both the Williams, Damon Hill on second and the pole sitter and Senna’s archrival Alain Prost. When the red lights went off Prost and Hill kept their respective positions. Senna at the start tried to move around the outside of Schumacher who defended him and Senna dropped to fifth as Karl Wedlinger overtook both Senna and Schumacher. Senna switches back to inside at Turn2 and passes Schumacher to claim fourth. He overtook Wedlinger one corner later. Senna went wide, late on brakes and Wedlinger was unable to defend his position.

Senna’s exit speed in corners was much higher than Hill, he exited the corner on top of Hill and took the inside line. Prost seemed too far ahead for Senna to overtake him before the end of the first lap, but Senna went after Prost and at the circuit’s fastest corner, a hairpin, Senna took the inside line and braked very late in the wet to surprise his rival and overtook him. Senna overtook a total of 4 cars in the opening lap in extremely challenging conditions, he found grip like no other driver in the rain. Senna said“It rained a lot. I started in fourth, but the first lap was a shock for the other drivers. I was pushed to the side by Schumacher and had two of my wheels off the track. I passed the German driver before the first corner and accelerated to catch up with Damon Hill. I passed the Englishman when he was braking. Prost was the next victim. I waited for the Esses and because he braked earlier than normal, a gap opened up for me to pass through”.

One of Ayrton pit-stops also went down in history. When he went straight through the pit-lane on lap 57, and since there was no-speed-limit at the time, he ended up with the fastest lap of the race. At Donington Park, the corner leading to the garages is shorter than the one leading to the main straight, and Senna had figured it out. The shortcut led to a time of 1:18.029, down from 1:20.413. Senna went to claim the win in a race where the weather gods decided to bring the rain whenever the driver’s opted to switch to slicks, but the master in wet took complete advantage of the rain as he drove flawlessly to take victory ahead of Damon Hill and Alian Prost.

Ayrton Senna had fond memories of the Donington Park track. That was where he tested for Williams in 1983, his first experience with a Formula 1 car. The 1993 European Grand Prix sure would have been the greatest memory of him for all his fans around the world.