Subjective, of course. Some say Juan Manuel Fangio running down Mike Hawthorn on lap 21 of 22 at the Nurburgring in 1957, after setting record lap after record lap. Others cite Tazio Nuvolari, same circuit and same race (German GP), back in 1935. He took the lead on the final lap in his outdated Alfa-Romeo, walloping the money-no-object Silver Arrows in front of 300,000 Germans. 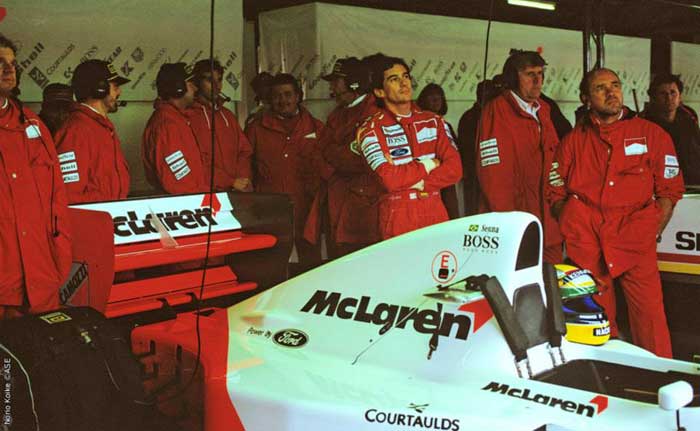 Then there’s Gilles Villeneuve nerfing it out with Rene Arnoux at the French Grand Prix in 1979, overtaking and re-overtaking, again and again. If you haven’t seen it, go straight to YouTube. Dicing at its best, sure. But most have forgotten that neither driver was as quick on the day as Jean-Pierre Jabouille, who won the race. Some say the greatest lap wasn’t in formula one but touring cars, or Indy, or Formula 3. But in this 20th anniversary year of the tragic death of Ayrton Senna, we’re going to stick with F1 and the breathtaking opening lap of the European GP of 1993.

It was at Donington Park, England, and Senna was in a slightly manic state, which we’ll come to shortly. He was driving a McLaren with a ”customer” Ford V8 that was considerably down on power compared with the works engines fitted to the Benetton-Fords, let alone the dominant Williams-Renaults. Although the best qualifier of the modern era, on a dry track Senna could place the McLaren only fourth on the grid. With pole often decided by a few hundreds or even thousands of a second, he was a huge 1.65 seconds off the pace.

After 25 minutes in to qualifying session he was at 1:25.6. Three minutes later the score-board flashed a 1:24.4, and while all others struggled,he has driven his next lap with time: 1:23.998. What a Lap ?! The greatest lap ever driven. It was one of those special days when you watched true greatness…

The Williams cars in the hands of Alain Prost and Damon Hill had comfortably locked out the front row. Beside Senna was Michael Schumacher in the Benetton, with Karl Wendlinger, in the new Mercedes-backed Sauber, right behind. The only thing that could help Senna in the race was that great leveller, rain. And the rain came, in buckets.

Still, when the lights went green Senna’s fourth soon became fifth. Schumacher had forced him right to the edge of the sodden track at the first corner, Redgate, allowing Wendlinger’s Sauber to nail them both. In the mist of spray, Senna jinked across the track and took Schumacher on the exit. It was in the next section, the Craner Curves, where things became slightly surreal. At first, it looked like Senna had completely overshot things and was about to punch a hole in the scenery. He was on the very outside of the corner, on a spectacularly different line to everyone else.

Miraculously he kept it together, as if he alone was in the dry, and dispatched Wendlinger. The Brazilian rain master then set his sights on the Williams duo. With an uncanny ability to find more grip than anyone else, he next nailed Hill on the inside of McLean’s. Prost had opened a minor break; Senna starting ripping into it. Three more corners down the road he slipped under the Frenchman’s guard at the Melbourne hairpin and took the lead. He’d gone from fifth to first in two-thirds of a lap. A lap later he was four seconds in front.

Still, at the time Senna was teetering on an emotional brink. His wish to drive for the Williams team was blocked by Prost; he saw obstruction and conspiracy everywhere. He toyed with racing in the US and even retirement. When Ron Dennis finally succeeded in securing his services at McLaren, Senna would agree only to a race-by-race contract. Inside the car, however, he held his emotions in check and, on that day at Donington, he was supreme. He was touched by God. He lapped everyone except Damon Hill en route to victory. And by the end of the race – the third of the season – he was comfortably leading the world championship.