Most drivers, after winning a race, are usually in the mood to celebrate, or at the very least to bask in the glory of the moment for a while. Not so Ayrton Senna, whose primary motivation after winning the 1993 Japanese Grand Prix was tracking down the impetuous newcomer who’d had the gall to unlap himself… 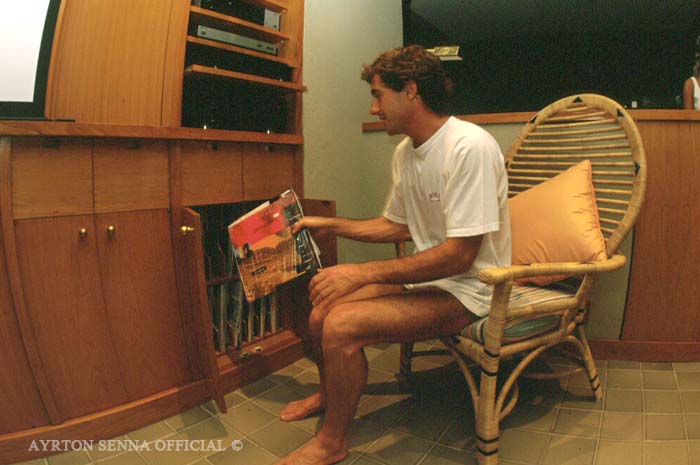 Picture the scene: Eddie Irvine has just taken a brilliant sixth-place finish in his maiden Grand Prix, and having changed out of his overalls, he’s now sat in the Jordan team’s rather rudimentary hospitality cabin in the Suzuka paddock, savouring the moment. Irvine has worked hard to get to this point, a portion of his personal savings having helped him secure his F1 chance off the back of several years of F3000 competition in Europe and Japan.

But whilst the Ulsterman can afford to be quietly satisfied with his debut F1 outing, not everyone is happy. In fact, a raging three-time world champion is on the war path, and Irvine is his prime target.Suddenly the door to the Jordan unit swings open and in marches Ayrton Senna, followed swiftly by a string of worried faces from McLaren, including the Brazilian’s race engineer Giorgio Ascanelli and the team’s director of communications Norman Howell.

Only moments earlier Senna had collected the winner’s trophy, but now, after being egged on by old pal Gerhard Berger, he’s here to give the grid’s newest member a thorough dressing down – and all because of a relatively minor racing incident.

“What the **** do you think you were doing?” says Senna, who’s already lambasted Irvine in the post-race press conference, by way of an opening comment.

“I was racing,” comes the Jordan driver’s blunt reply.

“You were racing?” says an incredulous Senna, seemingly taken aback by Irvine’s less than apologetic response. “Do you know the rule that you’re supposed to let the leaders come by when you’re a backmarker?”

“If you were going fast enough, it was no problem,” comes the quickfire retort.

This ‘discussion’, recorded for posterity by journalist Adam Cooper, would continue for some time…

For the uninitiated, the episode that had drawn Senna’s ire – and put his victory celebrations on hold – occurred late in the race when, on a damp but drying track, the Brazilian had come up to lap the battling duo of Irvine and Damon Hill. Senna held a relatively comfortable lead over arch-rival Alain Prost at this point and initially managed to slip past Irvine when the Jordan rookie ran wide at the tricky Degner section.

However, keen to resume battle with Hill, Irvine – a Suzuka specialist who’d competed in as many as 11 Japanese F3000 races at the circuit – closed back in on Senna’s MP4-8 before, in an unprecedented move, audaciously re-passing the then 39-time race winner around the outside into the chicane. Irvine would subsequently fall off the road again, allowing Senna to get by, but he’d rile the Brazilian still further by unlapping himself again on the penultimate lap, having survived a late race clash with Derek Warwick.

“You want to do well – I understand, because I’ve been there,” continued an irate Senna in the Jordan cabin. “But it’s very unprofessional…”

“But I would have followed you if you had overtaken Hill!” countered Irvine, tensions escalating.

“You nearly hit Hill in front of me three times, because I saw, and I could have collected you and him as a result, and that’s not the way to do that,” said Senna, imploring Irvine to admit his mistake.

Irvine, however, was having none of it: “But I’m racing! I’m racing!” he protested. It was at this point that Senna finally boiled over.

Moments later, with the two men still at loggerheads, Senna threw a fist in Irvine’s direction. How much contact he actually made with the brash debutant is open to debate, but Irvine, who’d been leaning on a table, hit the deck as Senna was manhandled away by his startled colleagues from McLaren. Within a matter of minutes news of the altercation had spread throughout the paddock – and would remain the hot topic of conversation for weeks until Senna was eventually handed a suspended two-race ban by the FIA.

Much to his chagrin, Irvine’s promising debut had been well and truly overshadowed. But on the other hand, no one is ever likely to forget it…