Born and raised in Utah, USA, Nichols was 13 years old when he made his racing debut, behind the wheel of a kart his parents bought him for Christmas in 1960. “My father used to subscribe to Car & Driver and they followed the European scene not in any great detail but they did cover Formula One. I found it quite fascinating, and the thing that really hooked me was Colin Chapman’s Lotus 25. To me, that was state of the art, when Indy racing was still all about front-engined Offy roadsters.” 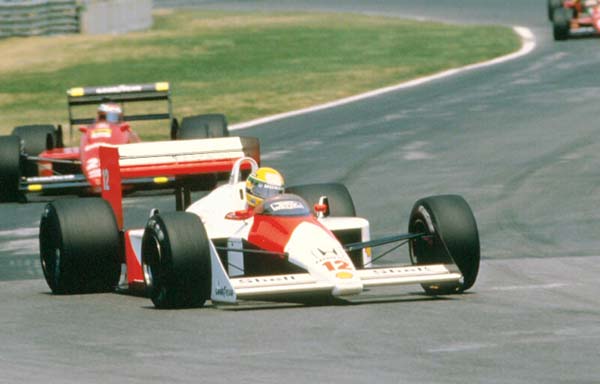 He harboured ambitions as a racing driver, but reckoned he would never be quite good enough, despite success in karting which he now dismisses modestly as being “at a local level”. Determined, though, to get into motor racing, he studied for a degree in mechanical engineering at Salt Lake City University. “The only reason I did that was because nobody offered a course in race car design. It was racing cars I was interested in, not engineering, and this was the closest I could get.”

He graduated in 1972. “F1 teams were still pretty small then. They had one or two engineers, maybe a couple of draughtsmen, and I didn’t think anyone would hire a young American straight out of college. I thought the best thing I could do would be to get some experience in a fairly technical field, so I took a job working on submarine based missile systems. I was there for four years or so and then saw a job advertised for a company called Gabriel, who made dampers for racing cars. I reckoned that was a foot in the door of motor racing although considering how I felt about Indycars at the time, it was strange that I was designing dampers for them.”

Nichols worked for just about all of the top Indycar teams, including Penske and Pamelli. Anothef customer of Gabriel’s products at the time was Chaparral, whose fabulously successful 1979-’80 challenger, the 2K, was designed by an Englishman called John Barnard.

When Barnard returned to England in 1979 to work on a fledgling F1 project with the Project 4 outfit, run by Ron Dennis, Nichols got in touch. “I knew John had contacts in the industry but I also knew he was working on this F1 project and I was sort of hoping he might have something,” Nichols says. Barnard offered him a month’s work – “just to see what it was like” – and Nichols jumped at the chance. In October the position became permanent but, by this time, Project 4 had been merged with McLaren to form McLaren International.

It was to become the team of the 1980s, winning five world drivers’ titles and four constructors championships. Nichols was an integral part of it. But designing all-conquering race cars still wasn’t enough. In 1982 he bought the FF2000 Van Diemen RF82 that he still races today. In fact he’s missed only two seasons ’88 and ’89 when he was rather tied up with the design of the McLaren-Honda MP4/4 that won 15 out of 16 Grands Prix in ’88 and being Ayrton Senna’s race engineer.

“Since 1989, the FF2000 has been looked after by Ken Thoroughgood of Universal Racing Services, so now I just turn up on the Sunday and drive it. That’s made it much more enjoyable and much more successful. I do a few little things to it; I’ve whittled away at the weight over the years and, at the track, like everyone else, I fiddle with wings and bars. But it’s just enormous fun. No racing is cheap but this is about as cheap as you’re going to get. The car is reliable, fun to drive and the competition is very strong.”

Favourite circuits are Cadwell Park and Oulton Park. “Cadwell is just perfect for club racing. I’ve finished second there a couple of times, having driven my nuts off. The experience of being flat out, nose right up behind the other guy’s gearbox, through the left-right at the Mountain, and then down through the trees to the hairpin, that’s pretty impressive. I remember a race at Snetterton in 1993, when I started from pole, led from start to finish, set fastest lap, and won by 18 seconds. That was satisfying in terms of putting one over everyone else, but not the sort of satisfaction you get from nose-to-tail racing.”

After some 15 years of sterling solo service, the Van Diemen has recently acquired a stablemate, a 1977 F3 Chevron. “I bought it because it’s pretty, which is a bit silly I suppose. I did a few races last season just to sort it out and see what it’s like, but in my third a stub axle broke and I had a huge shunt. I’m putting it all back together for next season now.”

Of course there was a time when race car designers were often seen on the track, Cohn Chapman being one good example. But does Nichols think that die hands-on experience counts for anything when it comes to the day job? “Maybe a little bit not so much in the actual design, but more when you’re working at the circuit with the drivers,” he says. “It perhaps gives me a bit more sympathy for their problems. I’m the first to admit that an old FF2000 car, with 140bhp, is a different animal to an F1 car, but I know how difficult what I do is, and that give me a lot of respect for what they do.”

Nichols has kept up his driving even while working for Ferrari and Sauber. Now back at McLaren, he has no intention of giving up. “I don’t know what the hell I would do with myself,” he says wryly. “I’ve tried generating enthusiasm for things like sailing, but I don’t enjoy it as much as racing. I’ll carry on until the rheumatism gets so had that I can’t get in and out any more, or the youngsters start beating me on a regular basis…”