The high level of optimism at McLaren, following the arrival of its new Honda V6 engine and of Ayrton Senna as Prost’s partner, was not diluted by rule changes for the 1988 season. These brought in a further reduction in fuel capacity to 150 litres and a mandatory 2.8-bar turbo boost limit, the benefit of both in theory going to McLaren’s normally aspirated rivals in a move clearly made ahead of the imminent ban on turbo technology which would come into effect for 1989. 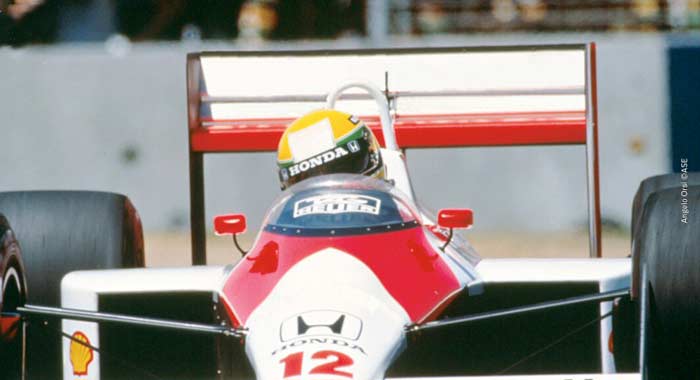 So swingeing was the fuel capacity rule that many expected 1988 to be a transitional year for the turbo teams rather than a winning one. But for McLaren at least it was to be nothing of the sort.

The new MP4/4 won 15 out of 16 races, losing only Monza which many felt was a self-inflicted defeat after Senna tripped over backmarker Jean-Louis Schlesser’s Williams-Judd in the first chicane. The Brazilian started on pole no fewer than 13 times and won eight races to take the World Championship despite having been disqualified in the opener in Brazil. At the same time, winning a scarcely less remarkable seven rounds, Prost found himself just three points adrift of the top slot leaving McLaren’s nearest rival, third placed Gerhard Berger, literally miles behind. By the end of the season McLaren had scored a phenomenal 199 points in the Constructors’ Cup, almost three times the tally of runner-up Ferrari.

In its final year of development  the 1.5 litre Honda  RA168E V6 turbo engine was at times putting out in excess of 700bhp. The MP4/4 won all but one of the season’s 16 Grand Prix races and scored three times the number of points as seconds place Ferrari in the Constructors Championship.

The team produced a total of six MP4/4 chassis for the 1988 season, even though they would be obsolete by the end of the year when the new 3.5 litre normally aspirated engine rules came into force.

The car which enabled them to achieve all this, a design which Trundle still insists is, “The perfect package, still the lowest and sleekest-looking car on display at the team HQ,” was not only a highly effective development of the 1981 carbon composite concept but also one which was correct in its tiniest details. With light overall weight, outstanding downforce, highly efficient brakes and suspension, and a fabulous V6 in the form of Honda’s RA168-E, Trundle is one of many who has no doubts that it was McLaren’s best-ever car.