Double world champion Fittipaldi is at the Brazilian Grand Prix at Interlagos. The event and the venue — where a teenage Senna first made his mark on the kart track beside the F1 circuit — always evoke memories of the legendary Brazilian. And Fittipaldi offered his recollections of May 1, 1994, when Senna was killed in a freak crash while leading the San Marino Grand Prix at Imola. 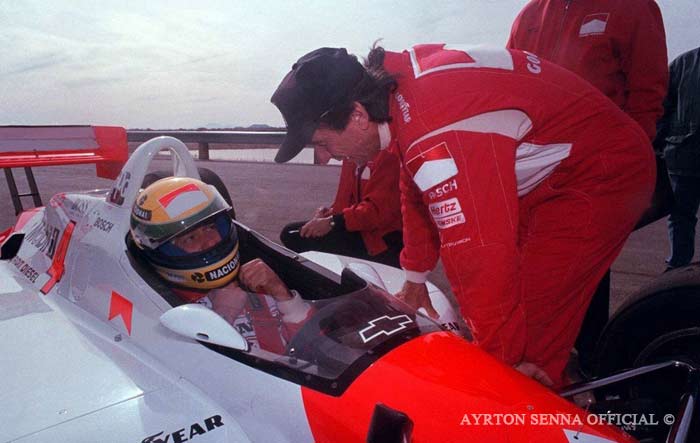 Fittipaldi had long since moved on from F1 and was testing his Penske Racing IndyCar at Michigan. He said: “I had just begun a flat-out run. I was focused, pumped, on the limit, in the zone, happy.

“Then my crew chief suddenly came on the radio. Emmo, come in, he said.

“That was very unusual so I asked, ‘Why, is there something wrong with the car?’
–  “No, no, no, just come in now please, he repeated.

“So I drove down the pitlane, brought the car to a stop in front of the Penske garage and said, ‘What’s the matter, guys?’ – “Your wife wants to speak to you on the phone, my crew chief said.

“I felt a terrible coldness in the pit of my stomach. I assumed something dreadful must have happened to one of our children — I could think of no other reason why my wife’s call was being treated by the crew as so urgent.

“So I jumped out of the car and sprinted to the garage, where one of the guys was holding the phone ready for me to take it.

“I had no words then. In truth I have no words now but I will try, nearly 20 years later, to express what I felt then.

“I felt the most profound sorrow, the most intense sadness.

“OK, of course I knew racing was dangerous. But other than poor Roland Ratzenberger, who had been killed at Imola the day before, F1 had not suffered a fatality since 1986.

“I looked at the Penske crew and said, ‘I can’t continue, guys. Sorry. Not now. Not today.’ They understood.

“Others around me shared my sadness, even if their loss was not as grievous as mine, coping as I was with the news of the death of a man who I both loved
and admired. – “I flew home that evening. On the plane, I felt numb.

“The memory of Ayrton’s funeral, which took place in Sao Paulo a few days later, and which followed three days of national mourning, will stay with me
forever.

“Three million grieving Brazilians lined the Sao Paulo streets through which his cortege passed — many of them openly weeping — and I am told it is still the largest single gathering of mourners in modern times.

“I was accorded the honour of being one of Ayrton’s pallbearers alongside Jackie Stewart, Alain Prost, Gerhard Berger, Damon Hill and Rubens Barrichello.

“We buried him in Sao Paulo’s Morumbi cemetery and on his gravestone is engraved the legend “Nada pode me separar do amor de Deus” — Nothing can separate me from the love of God.” – Fittipaldi shared his emotions in his latest blog for his old F1 team McLaren.

He added: “Ayrton was the greatest of us and he is still loved with frenzied devotion in Brazil.

“At Interlagos, as I wave to the cheering crowd, I will be waving not only for myself but also for Ayrton. I feel Ayrton’s presence every day. I pray for him often. One day I know we
will meet again.”