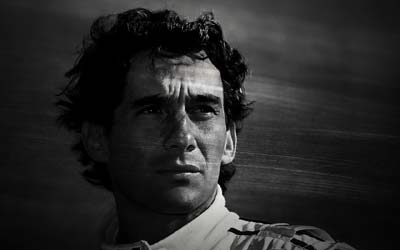 I thought, “he’s going to be in a really bad mood now”

Dread at the track, chaos at the hospital. Sennas personal assistant was in the thick of it all.

On sunday morning Ayrton arrived at the track still upset but much calmer and very composed. He was still in no mood for interviews. He followed his normal routine: a light lunch of fish or pasta at about midday, then lie on his own for an hour. His physiotherapist, Josef (Leberer), gave him his lunch but he wouldnt have a massage unless he had a problem. He just wanted to be on his own.  His best friend at the track was Gerhard Berger, but Gerhard was in no mood to talk as he was upset about Roland Ratzenberger; both Austrians and good friends. So Ayrton really was on his own.

He was on pole and when he left to go to the grid, I made my way to the press room. He usually had a particular way of pulling on his balaclava and helmet, determined and strong as if he was looking forward to the race. That day, you could tell just from the way he was putting on his helmet that he didnt want to race. He was not thinking he was going to die, but that he would win, but he just wanted to get it over with and go home. He was miles away.

I had hardly sat down in the media centre when Ayrton went into the wall on lap seven. My first thought was, oh ….., he is out of the race again, now thats three races and no points, hes going to be in a really bad mood now. I grabbed my handbag and ran, as my first thought was that I had to be there when he walked back to the pits.

When I reached the pits I remember someone saying, dont worry, he has moved his head. So I thought he must be conscious and I didnt even think he might be badly hurt. My only thought was to get back and make sure he didnt cause chaos or something like that.

Once I realised they had stopped the race I thought it must be more serious. I didnt see the end of the accident: I just saw him going off the track and hitting the wall. I didnt see the wheels flying. The moment I thought he might be dead was when they got him out of the car and laid him on the ground. I saw his feet just falling open and I just knew . . . your feet dont do that unless you are completely unconscious. I knew, even if I didnt want to know.

After that it was just tension in the garage. Alain Prost was in the Williams garage looking at the monitors waiting for news. It took ages. Then Ayrton was taken to hospital and I had to organise getting his brother to the hospital. Bernie (Ecclestone) organised a helicopter and I went to the hospital in Bologna with his brother, Leonardo, who was on the other side of the track with the Brazilian TV crew. Celso (Lemos) came and so did Josef. Ayrtons manager, Julian Jakobi, drove to the hospital.

Once there I didnt have time to feel traumatised. There was a lady doctor in charge of Ayrton and she wanted to give Leonardo a briefing on his brothers condition, so I had to translate for him and also for Julian, who didnt speak Italian. The doctor explained that Ayrton had a massive head injury, they were doing their best but they couldnt operate.

Berger came out of the room very shaken and said to me: It was truly awful, I wish I hadnt done it, I cant describe it. I said: Please keep it that way. I dont want any details. I said that (identifying the body) was the one thing I couldnt do. I had done everything else, organised everything but I couldnt do that, so Celso said he would do it. Suddenly, at his first race, Celsos career as managing director of licensing for the greatest living driver came to an end and he was identifying his client on the cold slab in a mortuary in a country far from home.

It was an horrific duty and it changed Celso. He suddenly declared that fate had put him in Imola on this fateful weekend and God had sent him and he took over, choosing the clothes that Ayrton would wear in his coffin. So Ayrton ended up wearing a black suit, something he didnt do in life.

I had already called the pilot and told him Ayrton wouldnt be going to Portugal and Id cancelled the helicopter to the airport. Now I had to collect everything.

Sky television were showing a programme on Ayrton. It showed him at home on Angra, a dream island off the coast of Brazil. He was suntanned, wearing a bright yellow top with a perfect blue sky in the background. He enjoyed life so much, he looked so young and carefree and in perfect health, and I just broke down. He had such a fabulous life and now it was all gone. I sat and cried and cried. Galvao Bueno (the TV Globo presenter) just said: ”Oh I didnt know you liked him so much.”