Sid was one of the greatest artists in F1, having worked with other world champions, like Emerson Fittipaldi and Nelson Piquet. In an interview to Car and Driver, which debuted last January, on the BandSports (Brazilian TV channel), Alan went into detail on how Ayrton Senna’s helmet was conceived. 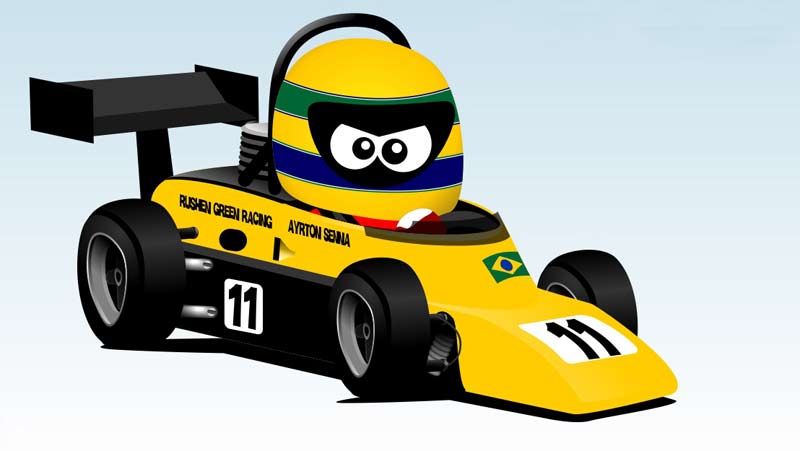 “Ayrton came here like any other kid, back in his go-kart days. Obviously, we already knew he was a different driver – he was bolder, he was always after better results. And he was already famous in the go-kart world. In 1978, he went to fight for the Go-Kart World Title, and the Brazilian team had four drivers. Two of them stood out: Ayrton and Mário Sérgio de Carvalho. We had to paint all four helmets in four or five days. And Mr. Mário, who was Mario’s father and the owner of the go-kart factory, brought us the helmets saying: “Each country must have its colors on the helmets”.

They could all be just one color, but they should follow a pattern. As my father used to say, the helmet’s colors are a driver’s face. Many drivers are better known with their helmets on. That was our focus; that became our main goal: to make each driver identifiable on the track thanks to their helmet’s painting. And my father was able to achieve that. We were more focused on Ayrton, since he was the driver who was better positioned to represent Brazil. ‘Let’s make it like the stripes are coming out of his eyes’. Sid already knew Ayrton, by then.

My father had amazing instincts when it came to painting. It’s not like he was psychic, or anything, but he had that feeling. And he was crazy about Ayrton. ‘I want the stripes to come out of his eyes, the green one. And the blue one, which is heavier, will be at the bottom, showing his focus, his objectivity behind the wheel” , said Alan Mosca, who also reveals that as soon as Senna came back from the Go-Kart World Championship, he asked to keep the paint scheme for good.