When they came to erect a memorial to Ayrton Senna opposite the place where he died, the people of Imola settled on a statue that showed him not in a moment of triumph on the podium at a circuit where he had won three grands prix, but in a more contemplative pose, sitting on the pit wall in his racing overalls with his head bowed, as if lost in thought. 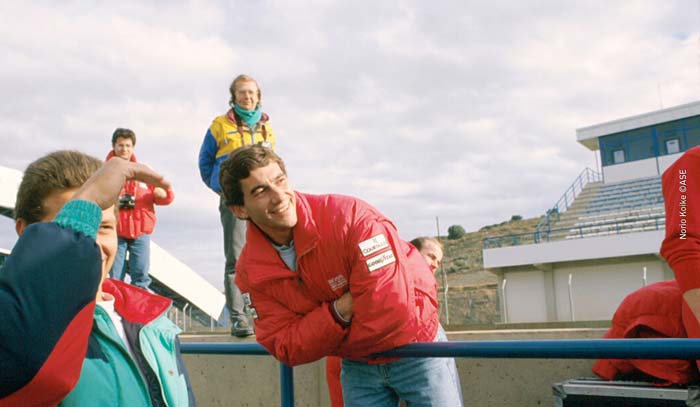 Thousands will spend a silent moment in front of that statue this weekend, thronging to the circuit to commemorate the tragedy at the San Marino Grand Prix 23 years ago, but not everyone appreciated the sculptor’s work. Many Brazilians were disappointed that, although producing an excellent likeness, he had failed to reflect the life-affirming joy Senna’s victories had brought them. Others, however, felt it evoked the deeper and more unusual qualities the triple champion brought to a sport in which a gift for introspection had not previously rated highly among the attributes required of a great driver.

Senna had everything it would take to create the grand prix hero of Hollywood’s dreams. But something else, something more mysterious, captivated not just the fans who continue to revere his memory but later generations of drivers to whom he represents a permanent reference point.

“We are made of emotions,” he once said, and his own were on show not just at moments of triumph or betrayal but in the way he drove, usually on the limit of control as he fought for one of his 65 pole positions or 41 race wins, fending off the challenge from his closest rivals, the small group of men who made up a remarkable generation of champions: Nelson Piquet, Alain Prost, Nigel Mansell.

His greatest moments were some of the finest ever witnessed in the sport: the long awaited first victory in his home grand prix – in São Paulo, his birthplace – in 1991, battling with a car stuck in sixth gear, and the mind-boggling first lap in the rain and murk at Donington Park two years later, when he went from fifth to first – past Michael Schumacher, past Karl Wendlinger, past Damon Hill, past an astonished and helpless Prost – in the space of a minute and a half of heart-stopping virtuosity and implacable willpower.

Then, too, there was the qualifying lap at Monaco in 1988, when he took pole position with a lap a second and a half faster than his nearest challenger, during which he realised that he was no longer in control of the car in the normal way. “I was in a different dimension,” he said. “It frightened me because I was well beyond my conscious understanding.”

Senna thought hard about what he did and what it meant, and he was never afraid to share his conclusions. Not many of his predecessors as world champion would have told the world that, on the last corner at Suzuka in 1988, as he prepared to take the chequered flag and his first world title along with it, he saw the face of God.

His faith was personal in nature, hard to explain and even harder to comprehend, but its existence was not in doubt. “I am able to experience God’s presence on earth,” he said, although religious ritual seemed to have little to do with it. “If I go to a church,” he explained, “I go on my own and I like to be there alone. I find more peace that way.”

Those who observed his rise often sought an explanation for his pre-eminence but none looked harder than Senna himself. “Sometimes I think I know some of the reasons why I do things the way I do in a car and sometimes I don’t know why,” he said. “There are moments that seem to be the natural instinct that is in me. Whether I have been born with it, or whether this feeling has grown in me more than other people, I don’t know, but it is inside me and it takes over with a great amount of space and intensity.”

The less appealing features of his career aroused an ambivalent response among those who found it hard to reconcile a man of such evident humanity and sensitivity with the competitor who in effect turned Formula One into a contact sport. The only excuse that can be made for the controversial collisions – with Prost and Mansell in particular – is his belief that he was in the right: something seemingly close to a divine right, in his mind, which only made it more troubling. When Schumacher followed his example, it was with a worldly cynicism absent from Senna’s assaults on his rivals.

That the statue at Imola should depict a pensive figure has seemed particularly fitting since evidence emerged of his mental turmoil on 1 May, 1994. He was deeply unhappy with his car; that much was known. But not until much later would it become clear that the death of Roland Ratzenberger 24 hours earlier, preceded by a spectacular accident involving his compatriot Rubens Barrichello, had led him to serious consideration of retirement, worsening a mood already darkened by angry conversations with his brother, Leonardo, who had been sent from Brazil by the family to dissuade him from marrying Adriane Galisteu, his girlfriend of 14 months.

Had that Sunday continued without untoward incident, all those issues might well have been resolved. Within a month Adrian Newey’s Williams-Renault FW16B, so unpredictable in its behaviour during the first two races, would give Hill, Senna’s No2, the first of six grands prix wins that season, taking the Englishman to the verge of a world title denied only by Schumacher’s chicanery. So had Senna survived, he would have won a fourth championship that year, perhaps reviving his appetite enough to continue his career with a team on the way to recovering their former dominance.

Then, surely, the titles that fell to Schumacher, Hill and Jacques Villeneuve in the following three years would also have been his, making him a seven-times champion at the relatively early age of 37. And at some point, had he married Adriane, his family would have reconciled themselves to his choice.

Instead we have the memory of a hero whose violent death prompted a surge in his sport’s popularity around the world, while prompting successful efforts to ensure that others would not meet a similar fate. It is an image that refuses to fade or lose its appeal to the emotions. 23 years later, and in a more scientific age, Ayrton Senna – a romantic, gladiatorial, complex virtuoso – still sets the standard.