Audio: Senna Interviewed by Ron Dennis After the 1990 Japanese Grand Prix at Suzuka. 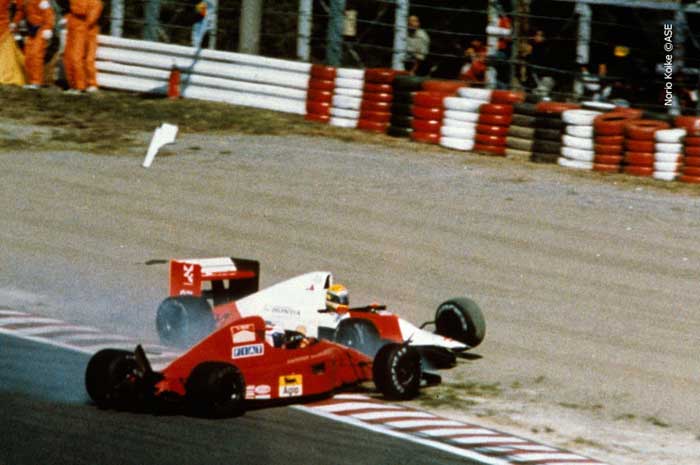 And so it was that once again, the F1 circus looked towards Suzuka for its new world champion. The stakes were high, though the roles were a little reversed. This time, Alain Prost, now racing for Ferrari, needed to win two races to take the title. All Ayrton Senna, his archrival, needed was for Prost to not finish the race in Japan.

As always, qualifying day ended with Senna scoring a perfect lap – a masterful 1m 36.99s lap. He was untouchable. But the pole position turned out to be almost useless, at least in Senna’s eyes. The starting position was on the dirty side of the track, and the FIA and Jean-Marie Balestre refused to change the side of the pole.

It was an angry, yet determined and focused Senna that got into the shiny McLaren MP4/5B. The race started and as expected, Prost shot off in the front from the get-go. Senna followed closely behind, taking an inside line, driving straight. Prost started turning into the corner, but Senna did not give way.

The two maestros collided in a violent cloud of dust. The race was over for Senna and Prost.

Gerhard Berger took over the lead as Senna and Prost walked back to the pits. The Austrian spun off on the second lap. Nigel Mansell running the Ferrari behind him took over the lead, but retired with transmission issues after 26 laps.

It was Benetton-Ford’s Nelson Piquet and Roberto Moreno who took the first and second place, with Aguri Suzuki finished third, becoming the first Japanese driver to get a podium finish. But the fight for the championship was over. Ayrton Senna was crowned king for 1990.