Alain Prost, who retired at the end of his title-winning 1993 season to be replaced in the Williams team by Senna, was joined at the funeral by two other former champions, Jackie Stewart and Emerson Fittipaldi. Gerhard Berger, Derek Warwick, Thierry Boutsen, Michele Alboreto, and Senna’s compatriots, Rubens Barrichello, Christian Fittipaldi and Roberto Moreno, also helped to carry Senna’s body to the graveside. 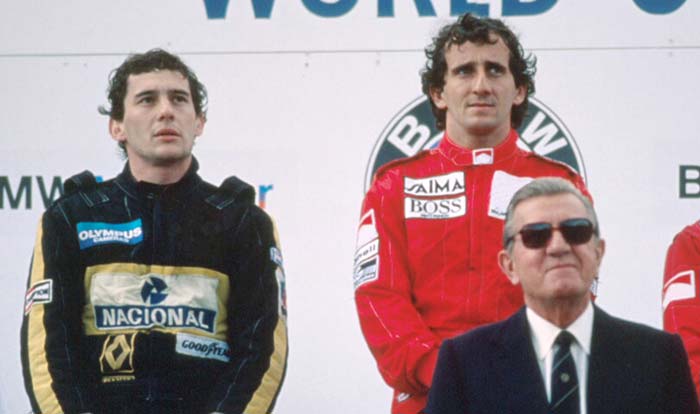 As well as Senna’s former racing rivals, the mourners included Frank Williams, the head of Senna’s team, and the McLaren chief, Ron Dennis. Prost, four times the world champion, said after the funeral that as a mark of respect for his former McLaren team-mate, he would ‘never get into a Formula One car again’. The Frenchman, who had several bitter disputes with Senna and was often not on speaking terms with the Brazilian, added: ‘He was the only opponent I truly respected.’

Senna, who died after crashing in Sunday’s San Marino Grand Prix, was buried with the honours of a head of state. For the second day running, Sao Paulo came to a near standstill as hundreds of thousands of people lined the streets to pay tribute. At the end of the funeral ceremony, Air Force planes used smoke to draw a huge heart in the sky with the letter S at the top. In Rio de Janeiro, the Sugar Loaf mountain cable car was stopped half-way to drop flower petals to the ground.

Senna’s body lay in state at the Sao Paulo legislative assembly for 24 hours until the funeral yesterday morning. During that time, about 8,000 people an hour had filed past the coffin, which was covered by a Brazilian flag with one of Senna’s crash helmets placed on top. Brazilians said the event had only ever been matched by the state funerals for the former president, Getulio Vargas, who committed suicide while in office in 1954, and Tancredo Neves, who died in 1985, days before he was to take office as president.

He was the only opponent I truly respected.

‘This is an unforgettable sight for all Brazilians,’ a commentator said. ‘This is Ayrton’s Senna’s last journey.’ Another said: ‘The man has died, the myth has begun.’ Yesterday’s funeral was broadcast live on all television stations in Sao Paulo.

The Williams team are likely to enter only one car, for Damon Hill, in the Monaco Grand Prix on 15 May but will make a final decision early next week after a testing session at Silverstone on Monday. A spokeswoman said yesterday the team had cancelled a test planned for this week. She said Monday’s test would be a ‘totally closed and private session with no one allowed in. We don’t want either of the drivers on duty, Damon Hill and David Coulthard, to be subjected to unnecessary pressure.’

The Simtek team have already said they will run just one car in Monte Carlo as a mark of respect for Roland Ratzenberger, the Austrian who died 24 hours before Senna during qualifying for the grand prix at Imola.