This morning, Brazilian TV Globo will show the last episode of its excellent 4-part documentary to commemorate 20 years without Ayrton Senna. It is centred on that dreadful Imola weekend and the few days that followed. I went to Imola for the first time in 20 years for this programme last January. I offered to go and paid for my tickets. I wanted/needed to be there. I thought it was time to come to terms with it all. 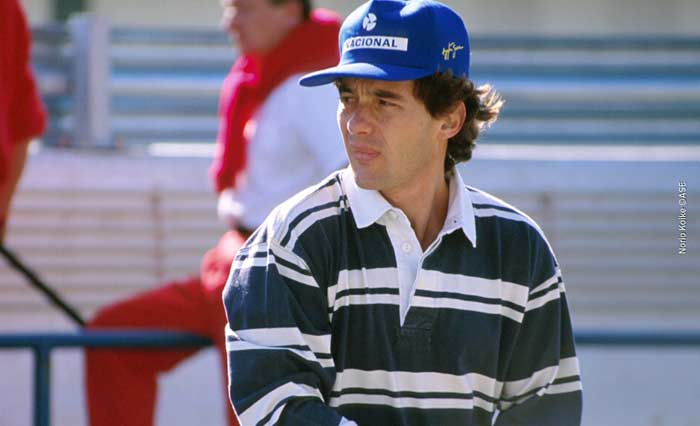 I hardly slept the night before. I was agitated on the flight over and physically shaking when I got there. I knew it would not be easy but I am a very pragmatic person and thought I’d be ok. After all, I don’t really need 1st of May to mourn Ayrton Senna or look at  one of his photos to remember him.

But that Imola track  played a trick on me.  All the memories came flashing back  and I did end up crying which I swore to myself I wouldn’t. The producer Ernesto Rodrigues and his crew were already there, interviewing one of the men who were in the safety car in which Ayrton took a lift to Ratzemberger’s accident spot. I went around the track with them, stopped at Tamburello.  Unfortunately, the programme is in Portuguese only. But I will add the video link later. For the time being I would like to recall an episode – which I make public for the first time for this programme – that struck me hard then.

Most of us – close friends, family, international guests – flown by helicopter  from the state wake at the National Assembly in São Paulo  to the Cemetery. I had helped to show people to their flights and had to juggle requests of the most varied types; including people who refused to ride in the same helicopter as this driver or that team owner!  I could hardly believe my ears  – that was not a holiday tour! – but obligingly found them a different ride.

After parading the streets of Senna’s home town, lined by hundreds of thousands of people, the fire truck carrying the body reaches the cemetery. Gerhard Berger, Ayrton’s best friend in F1, comes rushing to me. “Betise, Betise. You have to help me. Someone (who  shall remain anonymous) told me that Prost (Alain) and Jackie (Stewart) will be the front men carrying the coffin!  Apparently it is by order of who has won more World Championships!!You have to change that! They are the 2 people Ayrton hated most; the two who made his life harder!”. He was horrified and, quite frankly, so was I. I felt sick in my stomach.

I immediately set out to the task. On the way, I bumped into Geraldo Rodrigues, Rubens Barrichello’s manager and a dear friend.He asked where I was going in such a hurry.  “Gê (that’s how I call him), you’ll not believe that. They want to put Jackie Stewart and Alain Prost right in front, carrying the coffin. Ayrton must be rolling in the coffin. Must change that”, I explained and rushed off. After talking to the head of the Fire Brigade I found out that nobody would be carrying the coffin. “As it has been sealed with some extra material, the coffin is extremely heavy and, therefore, not safe to be carried on the shoulders”, I was told. “it will be put on a trolley and rolled along to the spot where it will be buried”.

I still had the problem of order. There was no doubt in my mind that Gerhard had to be in front. He had been part of most of the good moments Ayrton had on and off the track. If the criteria was World Championship, then I would put Emerson Fittipaldi on the other side. Behind Emerson, a foreign driver; behind Gerhard, a Brazilian. Boutsen had been a good friend of Ayrton’s, too. So I placed him behind Barrichello- who was behind Gerhard. Prost came after Emerson…

I remember racing to the entrance of the cemetery to get Damon Hill out of the van carrying the Williams’ guests. Frank was white and stunned when I slid the door open and asked Damon out. He was, too!! ” Sorry to be so abrupt but the family would like you, Damon, to be one of the pallbearers”, I lied. In my mind, I wanted to do what I thought Ayrton would have been most satisfied with.  He liked Damon. I liked Damon. But the English driver did feel a bit intrusive, I could tell. He hardly knew Ayrton, there had been only three races! I thought it was important to have his team mate there.

After that, I went up to where the drivers were gathered together, pretending I knew nothing about the previous arrangements, explained to them that the coffin would be wheeled along and sentenced: “Gerhard, Ayrton’s best friend in motor racing, will be in the front; on the opposite side the most condecorated Brazilian driver, Emerson; behind them we will alternate a foreign and a Brazilian and so on..”  I’d like to think Ayrton would have been proud of my taking charge, making an informed decision and acted on it.