Automatic gearboxes, ABS, traction control and active suspension had all made their entrance by 1993. Williams was at the forefront of this development with the radical active everything FW14B which dominated the 1992 season. After the widespread implementation of these systems throughout the field in 1993, and a further year of Williams domination with the improved FW15C, the FISA had had enough. 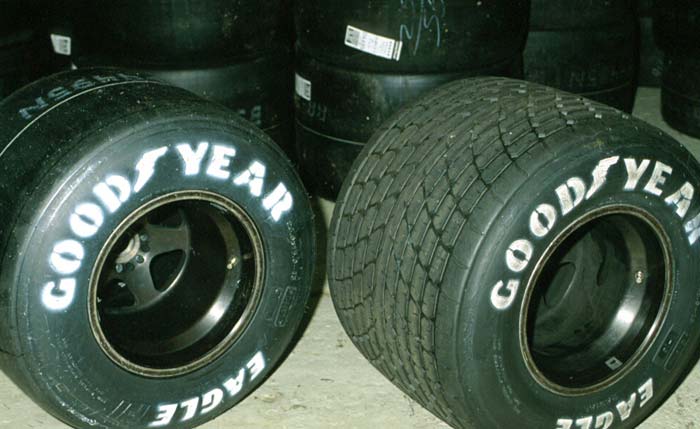 For 1994, all electronic driver aids were to be banned. The FISA felt the systems put more emphasis on the car than it did on the driver, making it “too easy” to drive fast. The aids detracted from the main focus of Grand Prix racing, which should be the talents of the driver. For Williams this sudden change of direction was not something they had planned for. Work had already started on an improved version of the active FW15C, which now needed to be made passive again.

Turning a chassis designed for active suspension and extensive electronic assistance was a questionable idea at best, but Williams did not have the time to design an entirely new car from scratch. Out of necessity they took the active FW15C as a starting point, and stripped it of all its systems.

In place of the FW15C’s active hydraulically operated suspension, a conventional layout with coil springs was used. Power came from a Renault RS6 3.5L V10, producing some 830 horsepower. The power was transferred to the rear wheels via a transversely mounted 6-speed sequential gearbox, which now lacked a fully automatic and pre-selector mode. The only electronic aid to survive the ban was the car’s power steering system, which reacted to input from various sensors. It was a leftover from the data-logging days of active suspension, and seemed to work well without it.

Williams implemented an innovative concept at the rear of the car, with a distinctive anhedral lower wing element. The oddly shaped part only worked in conjunction with a lower tail section, so the decision was made to fully enclose the driveshafts in their own carbon fiber wing sections. Despite the new aerodynamic ideas at work, the FW16 exhibited some peculiar and at times scary handling characteristics. Williams’ drivers for 1994 were Damon Hill (GB) son of double World Champion Graham Hill, and triple World Champion Ayrton Senna, who had replaced his arch-rival Alain Prost after the Frenchman’s retirement.

Early season testing of the FW16 revealed that the car was an extremely twitchy and nervous animal. It was stupidly fast, but suffered from a very narrow window of driveability. The smallest changes in setup would radically change the car’s behavior, switching violently from understeer to snap oversteer. As a result the car was either washing out wide out of the corners, or simply spinning off. It seemed like the FW16 had a very clear mind of its own, and it wasn’t too happy with whoever was driving it.

Even the great Ayrton Senna, by then widely regarded as the best driver in the field, couldn’t make sense of the unruly nature of the car. During early season testing, he commented:

“I have a very negative feeling about driving the car and driving it on the limit and so on. Therefore I didn’t have a single run or a single lap that I felt comfortable or reasonably confident.” “I am uncomfortable in the car, it all feels wrong. We changed the seat and the wheel, but even so I was already asking for more room.” “Going back to when we raced at Estoril last September, it feels much more difficult. Some of that is down to the lack of electronic change. Also, the car has its own characteristics which I’m not fully confident in yet. It makes you a lot more tense and that stresses you.”

Despite the early testing doubts, Williams decided to press on. The first round on the 1994 calendar was Senna’s home Grand Prix at Interlagos. Despite the FW16’s handling problems, Senna managed to put the car on pole in its first ever outing, beating out Bennetton’s Michael Schumacher by 3 tenths of a second. Damon Hill qualified in 4th, almost 1.6 seconds slower than his team mate.

Senna got away first at the start, but a fierce battle with the young German followed. Schumacher took the lead and started to pull away. After his second stop Schumacher had increased his lead to 10 seconds, but the triple World Champion behind him was starting to close the gap. Lap after lap Senna took chunks out of Schumacher’s lead, closing to 5 seconds by lap 55. The two had by then lapped the entire field, including third placed Damon Hill.

As Senna powered round on his way to the main straight, the FW16 bit back. Seemingly out of nowhere the car broke traction at the rear, resulting in a very amateuristic looking spin-out. With the engine stalled, Ayrton Senna was out of the race. Now without challenge, Michael Schumacher won comfortably with over a lap on second placed Damon Hill.

The second round of the championship took place at TI Circuit Aida, Japan, for the Pacific Grand Prix. During practice both Williams drivers were again fast, but again suffered from handling problems. In a eerily similar manner to Senna’s Interlagos spin, both cars lost control at Revolver corner in identical incidents.

Ayrton Senna commented: “I can’t explain it. I was actually in one of my best positions at that corner when it went. It looked silly and stupid but better it happens today than tomorrow.“

Qualifying went a lot better with Senna again on pole 2 tenths ahead of the determined Michael Schumacher, who was a further 3 tenths ahead of Damon Hill. On race day Senna lost his position to Schumacher in the very first corner, only to be bumped off the track by McLaren driver Mika Häkkinen (FIN). Ferrari’s Nicola Larini (ITA) lost control in the same spot, and rammed his scarlet machine in the side of Senna’s Williams, taking the both out with extensive damage. Damon Hill went out with a broken transmission on lap 49, making the weekend a total disaster for Williams. The embarrassing spins at both Brazil and Aida prompted Williams to extensively modify the FW16 problem child in time for the next round at Imola, San Marino.

“To be honest we made a bloody awful cock-up. The rear-end grip problem was purely a setup problem. We were learning about springs and dampers all over again after concentrating on active suspension for two years, whereas most people had been away for just one. We also had a rather silly aerodynamic problem—basically the front wing was too low—but that was raised for Imola, by which time we were looking in pretty good shape.”

During Friday qualifying for the San Marino Grand Prix, both Damon Hill and Ayrton Senna again spun their cars. The modifications to the FW16 had clearly not been enough stop its tendency to break traction. The session was cut short by a massive crash for Jordan driver Rubens Barrichello (BRA), Senna’s protege. On Saturday Simtek’s Roland Ratzenberger (AUT) was fatally wounded when his front wing broke off and he hit the wall at Villeneuve with close to 306 kph (190 mph), fracturing his skull. Ratzenberger succumbed to his injuries later that day. He was 33 years old.

Despite the spins and the tragedy which left him severely distraught, Senna managed to clinch pole for the third time. Schumacher was behind him as usual, with Damon Hill in 4th. The race was cut short when JJ Lehto (FIN) stalled his Bennetton on the grid and was rear ended by Pedro Lamy’s (POR) Lotus.

A safety car was called in while the debris was being removed from the grid. The safety car was a standard Opel Vectra, which was nowhere near fast enough to lead a pack of cruising F1 cars. Senna repeatedly pulled his Williams alongside and urged the driver to speed up, but the driver was unable to comply. Trundling along behind the dreadfully slow Opel caused the car’s brakes and tires to cool down more than they should have, which angered Senna. This was only the second year in Formula 1 that safety cars had been in use, and the race organizers had clearly not taken the speeds of a cruising Formula 1 car into consideration.

Senna remained in front for the restart, with Schumacher tailing him closely. On the second lap on the run down to the infamous high speed Tamburello corner, something went wrong. The FW16 veered to the right and plowed into the barriers after still managing to slow down from 306 kph (190 mph) to 211 kph (131 mph). The hard hit was insufficient to kill Ayrton, but a broken piece of suspension and a flying front tire sealed his most unfortunate fate. He was just 34 years old.

The cause of Senna’s fatal accident was discussed heavily, with numerous different reasons presented. As late as 2007 the Italian Supreme Court of Cassatio ruled the accident to be caused by the failure of a bad weld on the steering column. The column had been extended at Senna’s request. The modification had been carried out in an apparent haste and without the proper care. The court pointed to Williams chief engineer Patrick Head as responsible for Senna’s death, but the statute of limitations had long since passed, preventing a legal conviction.

Ayrton Senna da Silva received a state funeral in Brazil. Three million people lined the streets of his home town of São Paulo to pay their final respects to their fallen national hero. The Brazilian government declared three days of national mourning. In the wake of his death heated discussion arose about safety regulations. The uproar lead to the introduction of wheel tethers, raised cockpit sides and various other tremendously valuable safety innovations. The FIA’s panicked attempts at preventing further tragedies also caused it to hastily impose new design parameters. A narrower track and an engine displacement reduction to 3.0L from 3.5 were swiftly introduced for the 1995 season.

Ayrton Senna is still remembered to this day for his amazing skill and strong personality. His legacy lives on in the people that the increased safety regulations has saved since his untimely death. He remains the last driver to perish during a Formula 1 Grand Prix weekend.