He would have been 50-years old today. There is little doubt in my mind that he would still be influential in F1 but probably more so in the lives of young Brazilian children for whom he took particular interest in. His legacy may have been larger than fate has allowed and his impact on the sport more profound but as we look back on this birthday memory of the great Ayrton Senna da Silva: we recognize the man as profound destiny. Not just his own but many after him. 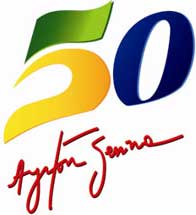 His foundation, Instituto Ayrton Senna, represents a tangible example of his love of children and particularly the low-income families and while it was established after his death, there is little doubt that he would have established a similar foundation had he lived such was his passion for the cause. His charitable heart and love of God was well known and his personal investment in impoverished Brazil, $400m, was enormous.

Like Juan Manuel Fangio and Jim Clark before him, Senna revolutionized the sport. He was a fierce competitor and lover of  life. Not without controversy, Senna raced with all the passion and zeal he had for life itself and never recoiled from the task and destiny he felt he was born to have. The on-track battles he had with Alain Prost stirred excitement and accusations that still remain on his record to this day and depending on your perspective, Senna was an aggressive driver who placed cars in positions through sheer brute force, elegance, otherworldly talent and passion. His abilities in a car were often reckoned as not-of-this-world.

Senna had a destiny and oddly, he would impact the destiny of so many others. The children of Brazil, motorsport and the lives of some of the best F1 drivers in modern day. Senna’s record have only been eclipsed by German Michael Schumacher who, not without controversy, has impacted the sport in a similar way. Aggressive driving, passion, otherworldly talent and drive. Equally charitable, Schumacher would list Senna as one of the drivers he respected very much. Upon equaling Senna’s record for wins, Schumacher broke down in tears when asked about how important that was to him. Schumacher exemplified many of the aggressive and ruthless characteristics of Senna but many fans of the Brazilian still place Senna as the greatest of all time irrespective of Schumacher’s records.

“I want to live fully, very intensely. I would never want to live partially, suffering from illness or injury. If I ever happen to have an accident that eventually costs my life, I hope it happens in one instant.” ~Ayrton Senna

Today one need look no further than British sensation Lewis Hamilton to see Senna’s impact on other men’s destinies. The young Brit has a yellow helmet, similar to Senna’s, and has listed the Brazilian legend as his hero. Drivers like Fernando Alonso, Michael Schumacher, Lewis Hamilton and even men who competed against Senna such as Gerhard Berger and Nigel Mansell have all praised the Brazilian hero as one of the all-time greats. What is your favorite memory of Senna? What recollection do you have on this birthday memory?  Is there a special memory you have of the legend that was Senna?

Bruno will honour his legendary uncle Ayrton by wearing a specially designed helmet. The Hispania Formula One driver launched a competition last month inviting designs to mark what would have been Ayrton Senna’s 50th birthday in 2010. After being overwhelmed by more than 500 entries in such a short space of time, five have been selected for a public vote on Bruno’s website: www.brunosenna.com.br

Ayrton, considered by many to be the greatest racing driver of all time, died 16 years ago when his Williams hit a concrete wall at high speed during the San Marino Grand Prix. The accident led to many safety changes in the sport and his name has lived on in F1 through nephew Bruno.

The winning helmet design will be worn once towards the end of this season, perhaps at the Brazilian Grand Prix on November 7, before being auctioned to raise funds for the Ayrton Senna Foundation, which supports youngsters in Brazil.

Entries came from across the world and the five shortlisted designs include two from Brazil, plus one each from Russia, France and Spain. Bruno evaluated the entries along with his family and graphic designers Sid and Alan Mosca. Alan, who knew Ayrton for more than 30 years, said: ‘It has exceeded our expectations.

” The amount of quality work is so high that it was difficult to come to a decision. Many good designs were left out because we were only able to choose five for the final vote.”