For the second year in a row, Nigel Mansell failed to win the World Championship in dramatic fashion. Mansell’s speed was never in question: he recorded more wins (six) and more pole positions (eight) than any of his rivals. But his Williams-Honda team-mate Nelson Piquet finished in the points more often, so when Mansell was injured in a spectacular practice accident in Japan, the Brazilian’s third World Championship was confirmed. 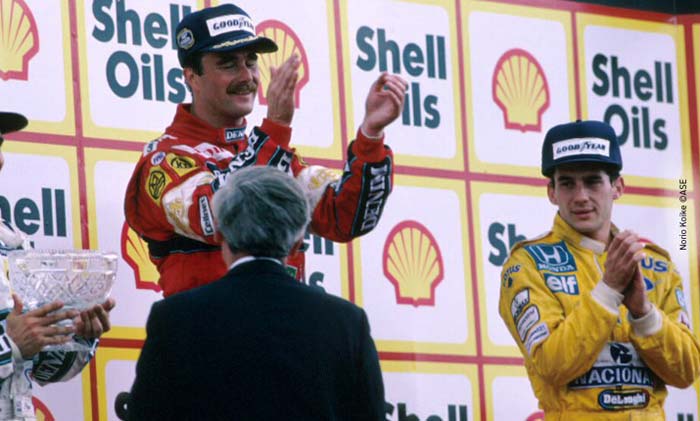 The year began badly for Piquet when a huge practice accident at Tamburello prevented him from starting at Imola. But a combination of podium finishes, lucky wins in Germany and Hungary, and a more convincing display at Monza ultimately gave him an unassailable lead. The high point for Mansell came at Silverstone, where he came from 28 seconds behind Piquet to snatch victory from his team-mate with a breath-taking passing manoeuvre into Stowe.

McLaren used the TAG Porsche engine for a final season but suffered as development of the unit slowed. Alain Prost was still able to win three times, including a brilliant victory in Portugal which established a new record of 28 victories in his Grand Prix career.

Ferrari’s Gerhard Berger impressed at Estoril before spinning out of the lead while under pressure from Prost just three laps from the finish. Berger raised hopes of a championship challenge in 1988 by winning the final two races of the year.

Ayrton Senna scored the first victories for the Lotus’s “active” (computer controlled) suspension system in Monaco and Detroit. Despite this technical advance and a switch to Honda engines, the team was unable to give him consistently competitive machinery. Senna announced he would be moving to McLaren at the end of the year and the original Lotus team never won a race again.

The Austrian GP was held on the magnificent Osterreichring circuit for the last time in a race that was stopped twice by startline accidents. Problems with the circuit’s narrow pitstraight meant it would not be used again for F1 until it was reopened as the much-modified A1 Ring.

1987 was a transitional season with turbocharged engines being gradually replaced by a new normally aspirated formula. Jonathan Palmer’s Tyrrell won the Jim Clark Cup for entries complying with the new regulations.