Having almost delivered the 1983 title to Renault, Alain Prost was surprisingly released by the team and he joined Niki Lauda in the new John Barnard-designed McLaren MP4/2-TAG Porsche. Prost won seven times in 1984 but it still wasn’t enough to make him France’s first World Champion. Lauda only won five events but clinched a third world title by just half a point at the final Grand Prix in Portugal. 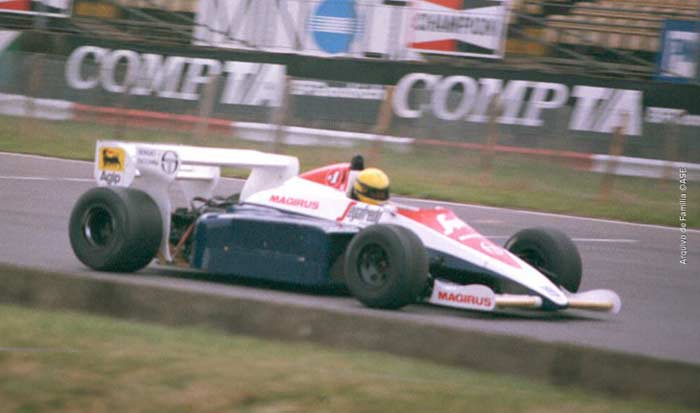 Nelson Piquet’s Brabham-BMW was often as quick as the McLarens but poor reliability limited him to just two wins – both in North America – and McLaren remained unbeaten once the series returned to Europe.

Derek Warwick almost won his first race for Renault in Brazil and team-mate Patrick Tambay led in France, but neither was ultimately successful as the French team started to decline. Ferrari hired Michele Alboreto, the first Italian to drive for the marque since 1973, and he scored their only win by defeating Warwick in Belgium.

The Toleman-Hart team replaced the departing Warwick with the reigning British F3 Champion, Ayrton Senna. A dispute between the team and its tyre supplier at Imola resulted in his failure to qualify for that race but the Brazilian’s performance for the remainder of the year marked him as a future World Champion.

Senna almost recorded his first Grand Prix win in torrential rain at Monaco. The race was stopped early (half-points being awarded) as the Brazilian closed in on race leader Prost. Nigel Mansell, in his fourth season at Lotus, was also denied victory at Monte Carlo when he crashed while leading. It was Mansell’s Lotus team-mate Elio de Angelis who provided the most consistent challenge to the McLarens, leading in Germany and finishing in the points eleven times to finish third in the championship.

Controversy enveloped Tyrrell, the only team still using a normally aspirated engine. Stefan Bellof and Martin Brundle impressed by achieving podium finishes in Monaco and Detroit respectively before FISA took fuel samples from the team at the latter race and found them to be illegal. The team was excluded from the championship and all of its 1984 results disqualified.

Fuel stops were outlawed on safety grounds and the cars’ permitted fuel capacity reduced. This often led to cars grinding to an embarrassing halt in the closing laps of a race after using the last of their precious 220 litres of fuel.