An inked image of a familiar race driver’s face stares out from the small plaque on the concrete retaining wall, surrounded by the man’s name written in graffiti in several languages, and flowers placed there by fans. Farther along that same wall, by a path where bicycle riders and joggers pass, sightseers and racing pilgrims stop to look at a much more majestic, large bronze statue of the race driver sitting in a pose that suggests the contemplation of a loss, perhaps that of his own life, in the accident he had against the wall 10 years ago. Ten years after motor racing lost its biggest star, Ayrton Senna’s legend grows even as his statistics fade in the era of Michael Schumacher: his achievements are remembered and draw new admirers and old fans. 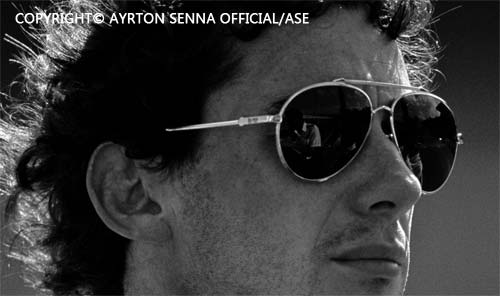 At the San Marino Grand Prix at Imola, Italy, this weekend, the 10th anniversary of Senna’s death at the same race on May 1, 1994, is being commemorated in books, a DVD, a CD, a photo exhibit and other projects. The track’s grandstand is being dedicated to the Brazilian driver who died at age 34 after winning 3 world titles, 41 races and 65 pole positions.

Murray Walker, the BBC race commentator, was proven right in his eulogy broadcast after Senna’s death, when he said: “Seldom in any sport does anyone reach the commanding heights that Ayrton Senna did in Formula One — a legend which will grow and grow as coming generations appreciate his achieve-ments. There never has been, nor ever will be anyone like Ayrton Senna.”

Although he was often considered one of the greatest drivers ever, Senna did not, in fact, dominate even his own era the way Schumacher does today. Alain Prost, Senna’s nemesis, scored more victories, 51, and earned one more world title than the Brazilian. Yet from the moment the two drivers became teammates at McLaren in 1988 their achievements were inseparable, their results dissected and compared and their fans polarized, giving the sport a suspense many say Schumacher’s domination has removed. Yet theirs was also a predictable domination: That first year at McLaren, the duo won 15 of the 16 races, and Senna won his first title. The next year Prost won the title under a cloud of controversy as the two collided at the Japanese Grand Prix and Senna was disqualified. The following two years Senna won the title, continuing the duel after Prost moved to Ferrari and then to Williams where the Frenchman won his fourth title in 1994 before retiring and handing his seat at Williams to Senna.

But of the two, it was Senna, not Prost, who became a legend thanks to a combination of his racing style, his passionate win-at-all-costs determination and his innate ability to elicit emotions from people — a talent that neither Prost nor Schumacher possess to the same degree.

“I liked his commitment, and his determination, and the kind of sheer belief that he had that he was quicker than anybody else on the planet,” said Darren Arnold, a fan from Staines, England, who was 16 when he watched the race on television in which Senna was killed. Arnold made the pilgrimage to Imola this weekend to be here for the 10th anniversary of his hero’s death. Indeed, the Senna legend was sealed with his tragic death and his place in history as the first star driver — possibly the biggest sporting hero ever — to die while exercising his sport in front of a worldwide television audience.

“I didn’t recognize how much more than a racing driver he was,” said Martin Brundle, a fellow driver, at the time. “In the world news it was Nelson Mandela becomes president of South Africa and Ayrton Senna is killed at Imola.” The day his body was returned to Brazil, a million people lined the route through São Paulo, from the airport to the Legislature where the body was to lie in state. The president declared three days of national mourning.

“Brazil is in a sea of tears today,” wire reports quoted Hugo Mendes Pacheco, who drove 22 hours from southern Brazil to watch, as saying. “Senna was more than the king of racing. He was a god.”

Yet few drivers have had quite such a mix of qualities and flaws. Although he was a naturally talented driver — revered for finding the perfect lap in qualifying and for courage bordering on foolhardiness — Senna did not possess naturally all of the attributes of a Formula One driver early in his career. According to a biography published last week in France and written by Lionel Froissart, a journalist at the French newspaper Liberation, who was close to Senna, the young man from a wealthy family in São Paulo did not, for instance, at first have the natural physique needed to muscle around the world’s fastest cars. Froissart writes in “Ayrton Senna: Croisements d’une vie”: “At the beginning of his career, Ayrton was far from having the constitution of an athlete. He was a frail boy of 1.75 meters. His arms and his torso were not particularly muscular.”

During his first tests in 1984 for the Toleman team, his engineers noticed that after half a dozen laps his stamina dropped and his lap times wilted. So Senna decided to hire Nuno Cobra, a physiotherapist who had worked with other Brazilian racers, to develop physically. From Cobra he also adopted part of his philosophy of mind over body. Even his reputation as the greatest driver in wet conditions was not inborn talent. In one of the films on a DVD, “The Official Tribute to Ayrton Senna,” which will be released Monday worldwide by EMI, Senna said in an interview in 1991 that he would never forget the first race he did in a go-kart on the wet track, and he was terrible.

His reputation as a mystic came not only from his open belief in God but of his talk of mystical experiences achieved through driving, as with his 1988 pole position in Monaco — where he won six times, more than any other driver. “I was already on pole position and I was going faster and faster, one lap after the other,” he told Gerald Donaldson, a Canadian racing journalist and author. “Suddenly I was nearly two seconds faster than anyone else, including my teammate with the same car. And I suddenly realized I was no longer driving the car consciously.

“I was driving it by instinct, only I was in a different dimension. It was like I was in a tunnel, as though on rails. I was way over the limit but still able to find even more. Then, suddenly, I realized I was in a different atmosphere than you normally are. Immediately my reaction was to back off, slow down. It frightened me because I realized I was well beyond my conscious understanding. It happens rarely, but I keep these experiences very much alive in me because it is something that is important for self-preservation.”

Unlike Schumacher, who invariably looks in better condition than the other drivers after a race, the Senna legend was enhanced by his occasional physical suffering. In 1991, the first time he won the Brazilian Grand Prix, along with a tough battle with Nigel Mansell, Senna’s gearbox had a problem and he raced the last seven laps in sixth gear, suffering so much physically that he had to be pulled out of his car and could barely lift the winners’ trophy on the podium.

“I often asked myself how he generated such emotions in people of so many different horizons,” Cobra said in Froissart’s book. “He had an aura that was particularly difficult to define. A certain strength, underneath which lay a huge fragility.”

Indeed, while Prost was known as “the professor,” for his calculated, cerebral approach to racing, and Schumacher is often called robot-like, emotion was a conscious part of Senna’s approach not only to racing, but to life. “We are made of emotions, we are all looking for emotions, basically,” he said in the film of his life made after his third drivers’ title, called “Racing Is in My Blood,” contained on the DVD. “It’s only a question of finding the way to experience them.”

In 1990, Senna rammed Prost off the track at the first corner at the start of the race, and thus took the title, as Prost could no longer earn enough points to beat him. A year later, after winning his third title, he admitted to knocking Prost off intentionally. He was driven not only by what he called “an incredible desire to win,” but by a desire to beat the individuals he saw as most likely to stand in his way to being No. 1. Senna’s most important record that still stands, that of his 65 pole positions — which Schumacher, with 58 poles, is staring down with only 7 to match it — may partly be thanks to this desire to crush his teammate.

Prost said Senna was interested only in beating him, and once the Frenchman retired in 1993, the Brazilian appeared to lose his target. He was not as motivated in fighting Schumacher, who would win the first three races of the season, including the one at which Senna was killed. In fact, the German driver was racing directly behind Senna when the Brazilian’s car veered straight off the track at the Tamburello corner after only six laps and ran into the concrete wall. It became Formula One’s blackest weekend, as the day before, during qualifying, Roland Ratzenberger, a rookie driver, was killed when his car lost an aerodynamic wing, lost grip and ran into the wall at the corner after the one where Senna was to have his accident. Several spectators were injured, one seriously, when debris from an accident at the start flew into the grandstands. It is thought that Senna’s steering wheel column broke, but all the details of the accident have never been elucidated.

“Unfortunately we only think about one driver and I like to remember both drivers who died on the same weekend,” said Schumacher during a news conference Thursday at Imola when asked about his recollections of Senna. Indeed, as Formula One commemorates Senna’s death, the sport is once again in discussions on trying to figure out how to slow the cars down to prevent such accidents from happening again.